It has been ten days since I attended Microsoft’s BUILD developer forum where I listened to many of the public details on Windows 8. The most valuable time I spent was that with customers, developers, press and analysts to share thoughts about what we all just heard about Window’s future. I also picked up a Samsung tablet with Microsoft Windows 8 Developer Preview on it. I have found that after actually using a product, I can learn 10x more than from any slide deck. I’d like to share my first impressions after using Windows 8 Developer Preview for 10 days, and I will start with the positive aspects. In my next blog, I will discuss the less appealing aspects or areas where it’s just too early to call.

Windows 8 is currently in the stage called “developer preview”. How does this relate to alpha or beta stage? Consider it pre-beta, in that it is almost feature-complete. So my thoughts will be in the context that this is a developer preview, not beta, and certainly not a shipping product.

Starting the Windows 8 tablet was nothing short of amazing. Press the power button, and in 3-5 seconds you are at the start menu. Nothing short of incredible and I hope this will be consistent between platforms and when lots of software is installed. I remember Windows Vista seeming good at beta stage, but then I started installing programs…

I was stunned at how well Metro works and how good it looks on the developer tablet. It is fast and fluid, minimal, graphical and optimized for a user holding the tablet with two hands in 16×9 landscape orientation. 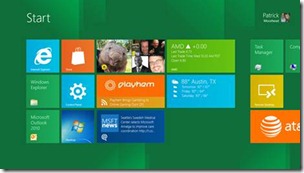 In fact, most of the important things I wanted to do I could accomplish with my two thumbs. No other tablet I have used comes close to that at 10” and above. Android Honeycomb forces me to reach in to the center to change programs and the thumb action is too far down the tablet in the lower right and left corners. Thumb actions need to be where the thumbs naturally rest.

Instead of icons and widgets, Metro uses live tiles. This combines simple navigation with instant access to relevant information. I have always loved Android’s widgets and screens. The issue with Android widgets is complexity and uniformity. Windows 8 goes a step further to provide uniform sizes and a simple update methodology.

I am an unrepentant fan of “smart” modularity, or making a device serve completely different functions when connected to another device. This must be done intelligently; otherwise users just won’t do it because it’s either not obvious, or too difficult. I was very impressed with my tablet’s ability to dock with off the shelf peripherals. Samsung’s tablet dock had ports for USB, HDMI, Gigabit Ethernet, and audio. When I returned from meetings, I connected the tablet to a 22” display, a full size keyboard and mouse. In desktop mode, it was like I was at a desktop PC, where I could do heavy-duty work and content creation. When I was done or if I went to meetings or home, I would undock and it was good on the couch.

“Play To” Amped Up

What’s different in Windows 8? First, it’s not buried five layers deep. It’s one thumb swipe away. Secondly, it supports content from the Internet Explorer 10 browser. For instance, even though it’s a preview version, I streamed HTML 5 YouTube videos from my tablet to my HDTV via my WD TV Live Hub. I ran every app I use on my Windows 7 machine in “desktop mode” without any compatibility issues. I used apps like MS Office 2010, Adobe Reader X, Evernote, SugarSync, XMarks for IE, Google Chrome browser, Amazon Kindle for Windows, Hulu Desktop, and Tweetdeck. Admittedly, I have been skeptical on full screen browsing. I’ve tried to like it since full screen browsing options started, but it always felt out of place and awkward because no other apps were full screen. Also, without “chrome” or borders, it was difficult to change programs. Windows 8 and Metro changed all of this. Compatibility was good, too, as long as I didn’t go to sites where plug-ins like Flash or Silverlight were required. I didn’t encounter many compatibility issues at all, surprising given how early this version is. Heck, even LogMeIn worked.

While it’s only been 10 days, it’s easy to get the feel of Microsoft’s Windows 8 Developer Preview operating system. This is particularly true after using so many different tablets over the last few years. There’s a lot to like about Windows 8 so far, particularly the Metro UI on a tablet and its chameleon-like capabilities to transform into a PC. As in life, there are always down sides to decisions or it’s just too early to tell how something will end. That’s the case for Windows 8, and I’ll be exploring this in my next analysis.