A Vacation with Apple Card

I spent the past three weeks in Europe with my daughter and just before we left, I received my Apple Card, so I thought this was the perfect opportunity to test it out and learn what I like and what I wish it had.

I had registered my interest in Apple Card as soon as it was announced and when Apple offered the opportunity to be part of the group who would get a preview, I jumped on it. I was leaving for Europe and the thought of having to pay currency fees for three weeks worth of purchases made me a little sick to my stomach. I was in the process of upgrading one of my credit cards to a $95 annual subscription fee card that would also provide a no currency fee option. Despite starting the upgrade process over a month before my trip, I was not sure I would get the new card in time. I just wanted to avoid paying currency fees, which, if you travel, you know, can add up to a considerable amount.

I am not much of a credit card user outside of travel. If I have the funds, I prefer to use my debit card, and I keep track of my purchases on a spreadsheet, so I am always on top of my finances. My debit card does not provide me with any rewards, so the idea of swapping my debit card with the Apple Card, especially for Apple Pay was a no brainer.

Apple Card’s repayment process makes it so that I can keep track of my purchase and pay at the end of the week so that funds are taken from my current account rather than building up debt for the whole month. I am sure it is more psychological than anything else, but in this way, I feel like I avoid any temptation of overspending. Apple certainly seems to be wanting to help drive healthier financial choices as they highlight the impact of interests on your spend. 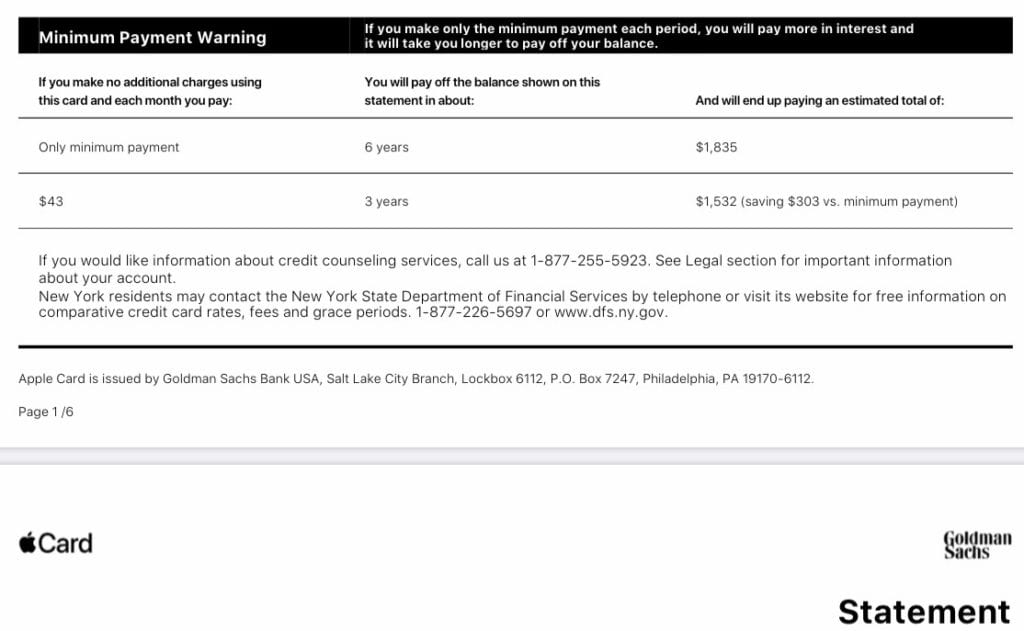 Although I use Apple Pay regularly, it has not been my default payment option outside of tested retailers where I know it is available, and it works. As convenient as it is to flip my wrist to pay, I hate to have still to ask whether or not Apple Pay is accepted. Even within the same chains, it gets down to individual stores having updated their POS. This quickly leads to frustration, which then makes me reach for my wallet instead. Now with the Apple Cash 2% cashback incentive linked to Apple Pay, I make more of a conscious effort to use Apple Pay, and you know better than I do, that consistency creates habits.

Registering Apple Card as the default Apple Pay card was, of course much easier than the steps I had to take with any of my Citibank debit and credit cards, especially when authorizing multiple devices. This is one less friction in the whole process that consumers have to face especially those who update their iPhone on an annual basis.

Once I got to Europe, the ease of contactless payments compared to the US made it so that using Apple Card on my Apple Watch was the most convenient option. Convenience aside, using Apple Watch rather than reaching for my wallet on a busy subway or tourist spot also made me feel safer in areas where tourists can be targeted explicitly by pickpocketers. This, of course, is true for any card you use with Apple Pay but my peace of mind extended to the fact that I knew that if my Apple Card was ever compromised, I also could generate a new card number and continue to use the card while on my trip.

As I mentioned, I keep track of my transactions regularly. I have a spreadsheet where I list what I spend, including recurrent payments, and what I earn. Apple Card provides an incredibly useful and detailed set of data if you, like me, want to have an accurate view of where your money is going. By the time you have processed the transaction, you get a notification on your iPhone, detailing retailers, location, and amount in your primary currency. Needless to say that when you are on a three-week trip not having to worry about retaining all the receipts so I could document my expenses on my return and check them against the final amount debited in my home currency is a huge bonus too. 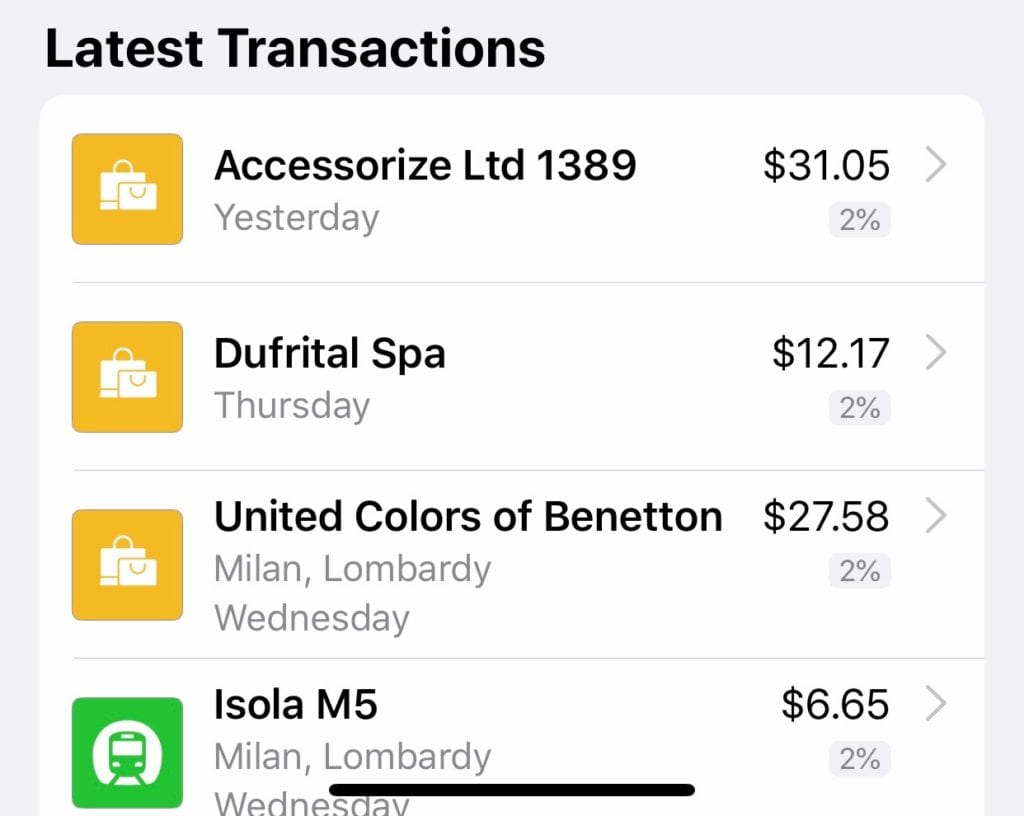 I particularly appreciated the speed of the transaction notifications when, while trying to buy tickets online for a museum in Rome, the transaction was flagged as possible fraud. As the payment was rejected online, my iPhone notified me of the purchase and asked me to confirm if I was indeed attempting to make the transaction. I was then able to go and try the purchase once again, which this time was cleared. If you have any credit cards, you know that that this process is not usually as simple. In most cases, even if the card issuer sends you a text message, asking you to validate the transaction, your card might still be blocked, which will require you calling your bank and having the card released. The two steps process takes considerably longer and creates much more friction for the user, especially when under time pressure on completing the transaction either online or at a physical retail store. The timeliness of the notification and the sense of control I had through the experience made Apple Card feel more like a modern, intelligent banking experience than anything I have experienced before.

I do wish Apple took the data a step further and allow users to either import the data into Excel or another budgeting app of my choice. Being able to use the data provided by Apple Card in expenses apps would also be valuable and would open up new opportunities for Apple in the enterprise space. Interestingly the recent study we, at Creative Strategies, ran on Apple Card had others mention the desire to have some level of integration into their favorite finance management app. The enterprise segment has been growing in importance for Apple but mostly as a hardware play. Being able to solidify its presence by delivering or integrating a service like Apple Card into core enterprise apps for travel and expenses would broaden the opportunity for Apple in the enterprise. As Apple pointed out over the past several earnings calls, enterprises have been investing in designing their own applications aimed at devices like the iPhone and the iPad, and you could argue that Apple Card could be another “device” those apps could consider.

During my trip, I earned just over $50 in Apple Cash.

While there is some good feel factor about it. That said, I have to admit that the real benefit of Apple Card for me came down to three things: a modern banking experience, peace of mind and a sense of control over my data and finances. What is interesting however is that I associate the benefit to my iPhone as Apple Card and iPhone become one for most of my purchases. As sexy as the physical Apple Card might be the only time I saw it while in Europe was when I showed it to someone. Hopefully, this will be the case more and more in the US too as contactless POSs continue to roll out. I have always said that Apple Card could be one of the stickiest services to bring value to the iPhone and in my short experience, it certainly seems that way.