Given the torrid pace of developments in the world of artificial intelligence, or AI, it’s probably not surprising to hear that applications of the technology in the business world are evolving quickly as well. What may catch people off guard, however, is that much of the early work in real-world use is happening in more mundane, back-office style applications like data security and network security, instead of the flashier options like voice UI, as many might expect.

As part of the AI in the Enterprise study recently fielded by TECHnalysis Research (see a previous column called “Survey: Real World AI Deployments Still Limited” for more background and additional information on the survey), over 500 US-based businesses that were actively involved in either developing, piloting, or running AI applications in full production, were asked about the kinds of applications they use in their organizations. Respondents were asked to pick from a list of 15 application types, ranging from image recognition, to spam filtering, to IoT analytics, and more, as well as the maturity level of each of their application efforts, from development to pilot to full production.

As Figure 1 shows below, the top two choices amongst the respondent group were Data Security and Network Security, with roughly 70% of all respondents saying they had some kind of effort in these areas. 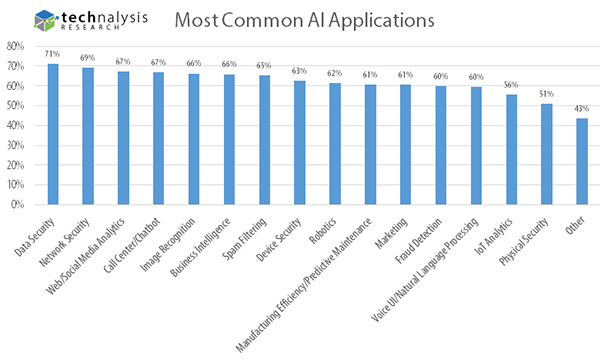 While these are clearly critical tasks for most every organization, it’s interesting to see them at the top of the list, because they’re not the type of applications that are typically seen—or discussed—as being cutting edge AI applications. What the survey data clearly shows, however, is that these core company infrastructure applications are the ones that are first benefitting from AI. Though they may not be as sexy as computer vision and image recognition, ensuring that an organization’s data and its networks are secure from attacks are great ways to leverage the practical intelligence that machine learning and AI can bring to organizations.

As important as the top-level rankings of these applications may be, when you look at the application usage data by maturity level of the implementation, even more dramatic trends appear. Figure 2 lists the top AI applications in full production and, as you can see, virtually all of the highest-ranking applications can be classified more as back-office or infrastructure type programs.

Spam Filtering applications made it to number two on this list and Device Security rose to number four overall. Again, both of these applications can leverage AI-based learning to provide a strong benefit to organizations that deploy them, but neither of them have the association with human intelligence-type capabilities that so many people expect (and fear) from AI.

When you look at the top applications in pilots, a dramatically different group rises to the top, as you can see in Figure 3. Here’s where we start to see more of the AI applications that I think many people might have thought would have appeared higher on the overall list, such as Business Intelligence, Voice UI/Natural Language Processing, as well as Image Recognition. What the data shows, however, is that many of these more “sci-fi” like applications are simply in much earlier stages of development.

Following the same kind of trends, the top AI applications still in development, illustrated in Figure 4 below, are focused on an even more distant view of the future, with Robotics at the top of the list followed by Manufacturing Efficiency/Predictive Maintenance and then Call Center/Chatbots. Companies are clearly driving efforts to get these kinds of applications going in their organizations, but the real-world implementations are still a bit further down the road.

Taking a step back from all the data, it’s interesting to note that there are unique groups of applications at the various maturity levels. Many of those that are high-ranking at one level are much lower-ranked at the next maturity level, suggesting very distinct phases of development across different types of AI applications. It’s particularly interesting to see that the realities of AI usage in the enterprise are fairly different than what much of the AI press coverage has suggested.

By understanding what companies are actually doing in this exciting area, it can help set more realistic expectations for how (and when) various aspects of AI will start to make their impact in the business world.

(Look for more data from this study and a link to summary results in future columns.)