Apple’s Mac line of products may be the product line that has taken the most scrutiny in the past few years. As important as the Mac is for nearly all of Apple’s power users, early adopters, media, and arguably some of the most influential people in many segments of the tech industry, its future had seemed to constantly been in question since the launch of the iPad.

Apple’s Framing for the Transition from Intel
Apple is often one of the best storytellers and best companies when it comes to framing big ideas. That skill was on full display as they made the case as to why they were transitioning away from Intel. To lead that message was Johny Srouji SVP of Hardware Technologies.

He set the stage talking about how the high bar of the iPhone and the designs team ambitions demanded custom silicon. It is this phrase demanded custom silicon that stood out to me and hit home something I’ve tried to articulate many times before. What it means is Apple had the ambition to take the iPhone somewhere, and they could not find any vendor silicon to meet their needs. In this segment on their work developing custom silicon for iPhone, Srouji also made this statement, “this is where we developed our relentless pursuit of performance per watt.”

He then went on to talk about iPad and some specific features, like Retina Display, that also demanded custom silicon. He is trying to nail the point home that they could not find solutions from third parties to do what they wanted to do with the product, so they made it themselves.

Ultimately, this has been the theme and the biggest advantage Apple has with a world-class silicon design team under their roof. I now, more than ever, am deeply convicted that Apple’s in house silicon team is crucial to Apple’s competitive advantage.

When you have this kind of control over your products, there is almost nothing you can’t do. That’s not something you can say with confidence about Apple’s competition in the areas that run Apple silicon. This is why the glaring outliner to this equation of success and differentiation was the Mac.

Before going into the segment on what is coming for Apple silicon and Mac, Srouji sums up their work for all the products running Apple silicon with this quote:

“Our SoC’s enable each of these products with unique features and industry-leading performance per watt. And it makes each of them best in class.”

Srouji is saying Apple Silicon is the reason these products have unique features and industry-leading performance per watt. That last sentence is really quite interesting as I have not heard Apple use it quite often, and it used to be something Intel said regularly.

Moving to the Mac, Srouji showed this graphic that I thought was quite interesting. 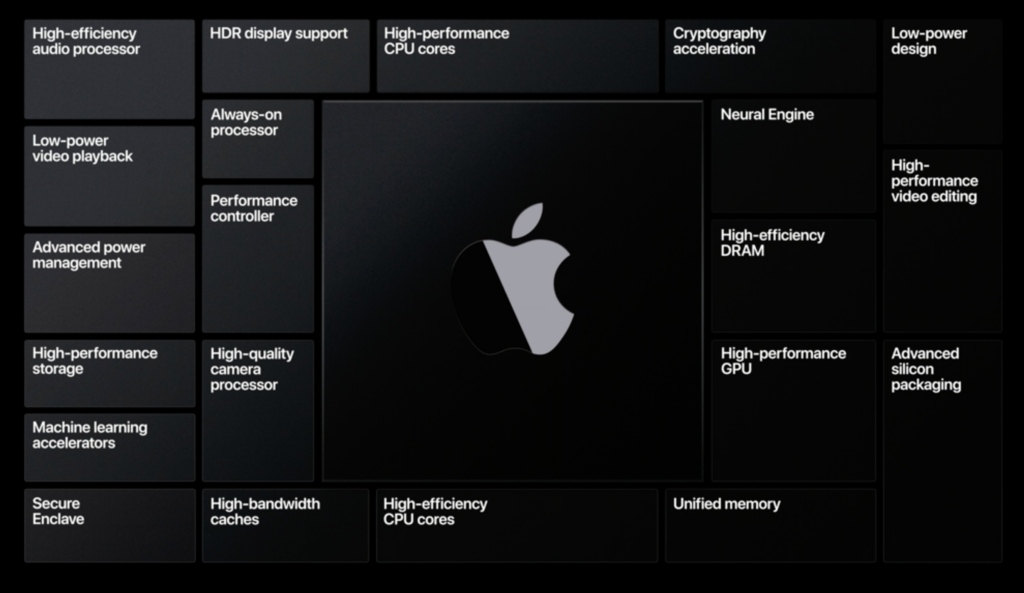 This image may contain one of the more comprehensive list of silicon components Apple designs. Some are core, and some are companion components, but the totality comprises of the architecture Apple has developed. Even more interesting under the hood nuggets we got from Srouji was the statement about the architecture Apple developed being scaleable to meet the needs of many different product classes while still being industry-leading performance-per-watt.

Now moving to the Mac, with the stage set Srouji leads with this quote:

“Our scalable architecture contains many custom technologies that WHEN integrated with our software will bring even more innovation to the Mac.”

Here we get the whole story that has truly been the common bond of success for Apple’s products. It’s the hardware/custom silicon and software integration, which includes developer tools like Swift, Metal, etc. The silicon, the hardware design, the operating system tuned to the silicon, and the developer tools designed to run most efficiently on that hardware is the combination that drives the Apple product experience. And now all of that is coming to the Mac. Telling was Srouji’s phrase that much better performance was reason alone to transition the Mac to Apple SoCs. Apple has incredible confidence they can deliver better performance overall in Macs than Intel or AMD.

The Mac, running on Intel’s x86 platform, which once led the industry in innovation in silicon, is now the weak link in Apple’s product vision according to the way Apple framed this bold move.

The Big Unveiling Still a Mystery
Apple is offering developers a kit to help them transition their apps native to Apple Silicon by equipping a Mac Mini with the A12Z Bionic, which runs in the current iPad Pro. Srouji was clear they are developing a family of SoCs for the Mac, which means they will eventually transition off Intel entirely, so long as the vast majority of apps get optimized for Apple Silicon.

They will have Apple silicon for the full range of Macs going all the way to Mac Pro if I interpret the language correctly. Some will argue that the workstation/Pro market will still need Intel or AMD, and I can see that playing out if the pro tools don’t move to Apple Silicon. Every other Mac will move to Apple Silicon for all the reasons that Apple Silicon enables Apple’s product vision in all their other products.

The first was Apple power management technology. Highlighting this, Srouji said they would maximize battery life with Macs with Apple Silicon Inside. This was always a big benefit of the Snapdragon-based Windows PCs I’ve used where they get north of 17-20 hours of battery life. I’ve always said if Arm can be successful in notebooks, we will start talking about battery life in days instead of hours. I hope Apple makes this happen as it would be a tremendously meaningful advancement for the Mac platform.

The next feature highlighted was the secure enclave. This is a point I repeatedly brought up about all the other Apple products with Apple Silicon and their advancement with security and privacy. Apple’s ability to provide industry-leading security and privacy is because they control the silicon stack, and it is a primary reason we don’t see many of the same security features on Mac. It sounds like that is all about to change.

Srouji also touched on the custom GPU Apple developed and made a point to call out pro-applications as a benefiter from Apple Silicon in Macs. Similarly, he made points about gaming, although I’m less optimistic about the gaming potential of a Mac vs. what we see in PCs. At least for now.

The last point touched on was the neural engine and machine learning accelerators Apple created claiming the Mac would become a compelling platform for machine learning applications. The part here that could be interesting is how the Mac family of silicon can run on later generation process technology if Apple wants as well as benefit from a larger die-size than what they have to do for iPhone and iPad because of size.

A key part of the debate about Apple spending the time to invest in the Mac has always centered around if it was worth the cost given Macs relatively small market share in PCs with ~10%. This was always my big question, but Apple succinctly answered that question by framing this transition that their vision for the Mac is bigger than what Intel/AMD/x86 can offer them. If Apple is right and can grow share and have the Mac appeal to more users, it benefits their whole ecosystem and customer base.

I’ve long been a fan of the phrase that Apple is blessed by its developers. iPhone would never have become the industry giant it is without Apple’s developer ecosystem. That ecosystem translated slightly to iPad, not really to Apple Watch or Apple TV, but most Apple developers first love was the Mac. While the iPad is an incredible product, for many, it is more luxury than a necessity in terms of a core computing device. The Mac, however, is an essential work machine and is more like iPhone in its necessity, and if there was any other computing platform I had a strong sense of confidence Apple’s developers would again bless them on it is the Mac.