Apple TV+ is coming in the Fall, but Who Wants It?

This week Bloomberg published a story following a tweet from Apple’s CEO Tim Cook offering a preview of “The Morning Show” what appears to be the first series launching on Apple TV+ in the Fall.

According to the article that quotes “people familiar with the matter who asked not to be identified”, Apple will be introducing a small selection of shows and then expand its catalog over several months. The same people said to be expecting a trial period, which is not a difficult assumption to make given that Apple offered a free trial both with Apple Music and Apple News+.

Earlier in the week, the Financial Times reported that Apple’s initial budget for original content of $1 billion had grown to $6 billion, which is not all surprising given the caliber of the actors and writers involved but also what seems to be Apple’s preferenze to pay for the whole series in advance.

Since Apple TV+ was announced, back in March, industry watchers have been busy figuring out how much the service will cost as well as what kind of impact Apple could actually have in a market where consumers have plenty of choice between established players such as Netflix and Hulu and new one like Disney+. We, at Creative Strategies, were also curious to know who was most interested in the service, what drove such interest and also what they were willing to pay for it, so in early August, we asked 1100 consumers. This article shares the results from our 750 US panelists who answered the survey online and were not compensated to do so.

The first thing we wanted to capture was the level of interest, so we asked: How interested are you in Apple TV+? Of course, asking consumers to express their interest is always a little tricky, especially in the case of a service like Apple TV+ when we are still missing many details. That said, understanding why consumers are interested and what they would be prepared to pay is extremely useful in trying to forecast uptake. Among the consumers we interviewed, 20% said to be “extremely interested”, and another 21% said to be ”very interested”. The majority of the ”not at all interested” group were consumers we identified as either early mainstream or full mainstream when it comes to technology. This might indicate that they are as cautious with new services as they are with tech and they are not among the firsts to acquire it. 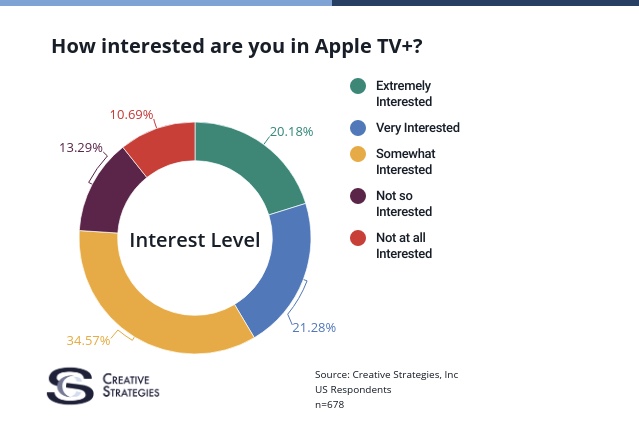 It is not a surprise that 52% of the consumers who said to be extremely interested or very interested are part of our Apple Core group, a sub-set of our broader consumer panel. These consumers are the heavily engaged Apple customers as assessed by the number of Apple devices they own, the amount of money they spend within the ecosystem, and the general positive attitude towards the brand.

Interest, however, is not enough, Apple will want to drive revenue, and that requires a commitment to paying for the service. Among the respondents, 21% are very likely to subscribe, 15% are likely and 23% and somewhat likely to subscribe. When we just look at those panelists who said to be extremely or very interested in Apple TV+, the percentage of very likely subscribers grows to 49% and likely rises to 33%. 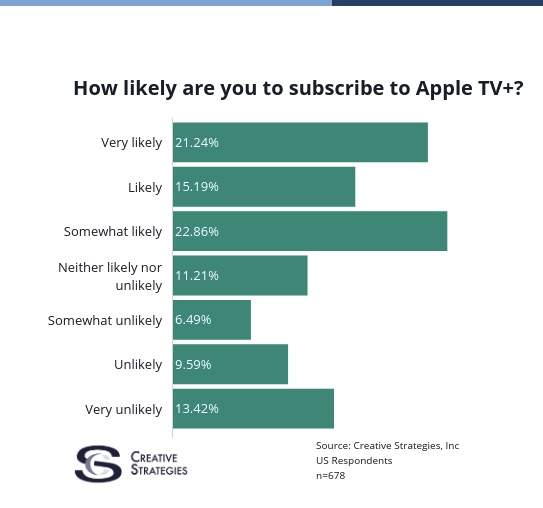 What Price is the Right Price?

Three factors drive the interest in Apple TV+: first the focus on quality original content (55%), second the integration with Apple TV (42%) and third the caliber of Hollywood talent creating content for Apple TV+ (39%). As we often do with our questions, we let respondents add free format answers and interestingly some specified that when it comes to quality, they are hoping for less violent, less political and less extreme content while others simply said they were hoping for something different. Other respondents specifically called out cord-cutting and Apple TV + as a means to get closer to embracing cord-cutting.

So we have the level of interest, the level of propensity to subscribe but the key data point is: for how much? This is probably the hardest question to ask a panel, but considering how this study involves a high number of early adopters and well-informed consumers, we feel we got a realistic answer rather than a wishful one. Fifty-one percent of the respondent felt that a monthly amount of $6 and $10 would be a reasonable amount for Apple TV+ . Another 22% opted for an amount between 0 and $5. It is interesting that when looking only at consumers who are very likely or likely to subscribe to Apple TV+, 60% feels that an amount between $6 and $10 would be reasonable while the number of consumers saying 0 to $5 is the reasonable amount declines to 17%. Our panelists were asked the question before the Bloomberg article was published with the detail that the service is likely to cost $9.99 a month. Yet, it is fair to assume that the amount they felt reasonable is likely linked to what consumers already pay for Apple Services as well as what they know about the cost of other video streaming services such as Hulu and Netflix.

This was a preliminary study to measure interest across Apple Services like Apple News+,  Apple TV+,  Apple Arcade and Apple Card. After Apple TV+ rolls out in the Fall, we will ask more detailed questions on other streaming services, overall spent as well as viewing habits, likes, and dislikes. Hypothetical questions on the likelihood for Apple TV+ to replace other subscriptions would have been premature when details on the actual content are still missing.

I am expecting Apple to be more aggressive than usual with its Apple TV+ advertising, and if what reported by Bloomberg is correct, kicking off with a few episodes released at the same time so viewers can watch during the free trial and get hooked on the content could be quite effective in driving subscriptions. It would be fascinating to see if Apple, who has been focusing on positioning itself as a bastion of privacy will succeed in positioning itself as the defender of morality and ethics when it comes to content.