Apple’s Patient Strategy for the Home

Apple’s strategy for the smart home has been one of the areas I’ve been most critical. Mostly out of frustration when I see Amazon and Google flooding the market with options for smart home control centers. At Apple’s fall launch event yesterday, their smart home strategy becomes more clear and quite differentiated.

For as far behind as Apple has seemed in the home, the caveat in our analysis was always that Apple owned the pocket more than Amazon, and even Google to a degree. I always felt if Apple could better leverage its end computing devices, mainly the one you have with you at all times, they could catch up quickly. I use these words catch up somewhat lightly because, in Apple’s mind, they were never behind, but that’s a different story.

The broader picture Apple painted was how much stronger their HomePod + all other devices strategy could come together now that a $99 HomePod is an option, and you can have one in many rooms of your house. Where this story came together was with Apple’s Intercom feature, where when you want to send a message to your family, it can play on not just the HomePod/HomePod mini in the house but any device, including AirPods. 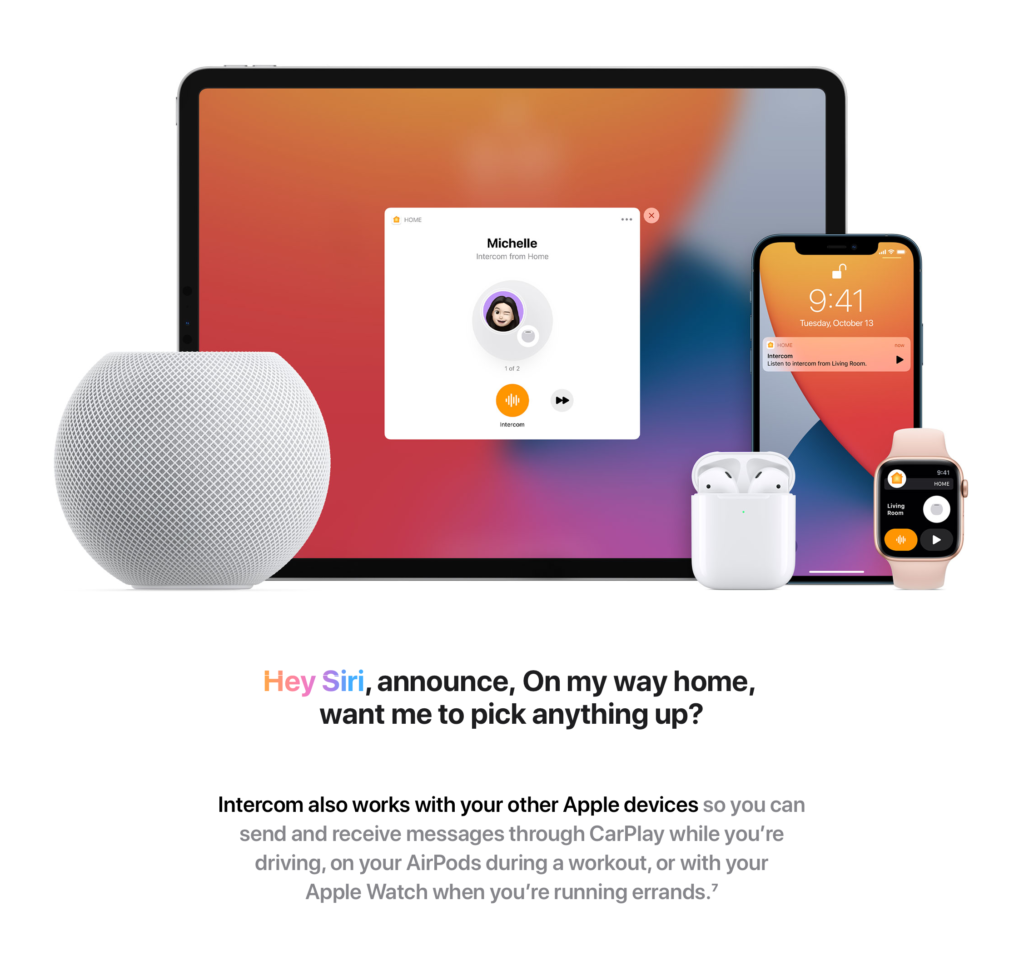 This image demonstrates Apple’s ability to leverage the numerous other devices in the home and outside the home and glue them together with the presence of a smart speaker. What this highlights again is Apple’s ability to integrate and how a solution can cleanly tie together the more devices you own. Many of the voice assistant products from Amazon and Google feel more like island experiences where the device does what it does, and that’s it. Largely that is because Amazon and Google may have an Echo in a room in the house, but they don’t own all the other common endpoints most consumers care about used daily.

The elephant in the room for this strategy is, of course, Siri. And while I admit Siri is still weak in many of the areas where Alexa and Google Assistant are strong, the more consistent parts of the Siri experience that do shine are the ones where you don’t have to talk to Siri.

Overall, Apple’s positioning of Siri was telling. While I blatantly disagree with calling Siri a world-class assistant as they did, Siri is, for now, a mostly competent assistant for what it is designed for. Apple gave examples of Siri in use cases I’ll bucket as automation, facts, and anticipation.

For automation, I’ve long argued that is all people do with smart assistants mostly anyway. Things like to set the alarm, play music, set a timer, or simply turn off a light. All you are doing is using your voice to complete an action you would have otherwise had to use your fingers for. This is easily the dominant use case for voice assistants today, and Siri is competent here.

Facts had traditionally been Siri’s weakness, and even study after study we did on how people use smart assistants, we did not find facts or general information to be a top use case for any assistant other than Google’s. While it is nice Apple added more facts to Siri’s knowledge base, it is unclear to me if there is much value here for Apple/Siri.

Anticipation is the most interesting category for me. This is where Apple owning the pocket of its customer can reveal the most value in Siri. And most interestingly, the best examples of this today show up in situations where you don’t talk to Siri. Siri suggestions in things like contacts, mail, apps, and others are looking at behavior and attempting to limit steps you need to take to get to the desired action. These are the powerful areas where Apple can press on their advantage of owning the pocket and do more than Amazon can and Google to a degree.

We are beginning to see more of Apple’s home category start to take shape. When they created a subcategory for home out of “other” from a revenue standpoint is indicated they had more products and services than just HomePod in the pipeline. The smart speaker market is a relatively large one with estimates of the current installed base being ~280m smart speakers worldwide. Amazon having the largest chunk of that, and an interesting question is how loyal will current iPhone owners are also Echo owners be to the product when they see more of the ecosystem value and price of HomePod mini. A study we did months after HomePod was released showed price as the major barrier for people to purchase one and the vast majority (54% of people saying they would be very interested in a lower-priced HomePod mini. A note I read from Morgan Stanely indicated the lower-priced HomePod Mini increases Apple’s total addressable market by ~4x.

The lack of Spotify could be an interesting problem for Apple, although I do hope Apple works with Spotify to support the service as it will greatly aid in the value proposition. Other areas to watch are ways Apple can tie HomePod nicely into Apple TV and perhaps even with things like AppleTV+ with unique audio experiences. Another angle for Apple to drive up HomePod’s base is to offer the Mini as a bundle with other hardware via promotions.

Ultimately $99 is a much more aggressive price for the Mini and a key strategy for the home for Apple in my opinion, and HomePod Mini should help Apple gain ground against Amazon and Google and lay a deeper foundation for Apple’s ecosystem.