Most of the major online sites we use today are free. Sites like YouTube, Google Maps, Facebook, Linked In, Reddit, etc. use advertising and premium subscriptions to make money, but ads are at the heart of their broader business model.

However, posting ads indiscriminately and not truly targeted at people’s interest is losing favor with millions of consumers. I have had ads in my feeds for bra’s, and other items clearly targeted to women. I have also had ads in my feeds for boats, private jet services, and exotic foods that clearly are not in my personal wheelhouse of interests.

Over the years, I have asked myself that if I had a chance to subscribe to sites, I use daily but do not necessarily want untargeted ads, what would I be willing to pay for them? When I did this personal exercise, I realized that the answer to that question was based on their value to me. For example, I use Facebook and Twitter multiple times during my day so they would have the highest value, and I would pay a larger subscription fee for them. On the other hand, I perhaps use Pinterest once a week and Yelp at best, every two weeks, so their value to me would be lower, thus I would want to pay a much smaller fee to use them without ads.

Thanks to a new survey by the McGuffin Creative Group, an advertising agency based in Chicago that works with consumer (B2B) companies, they recently did a survey to look at what people would be willing to pay for a favorite service.

This first chart lays out what their respondents said they would pay for a variety of highly used services:

“In a recent study, we set out to measure the regular value users placed on 16 of the most widely-used apps, asking respondents what they’d pay if a subscription fee was required. They had the option to say they would pay nothing and discontinue use, without access to a free alternative.” 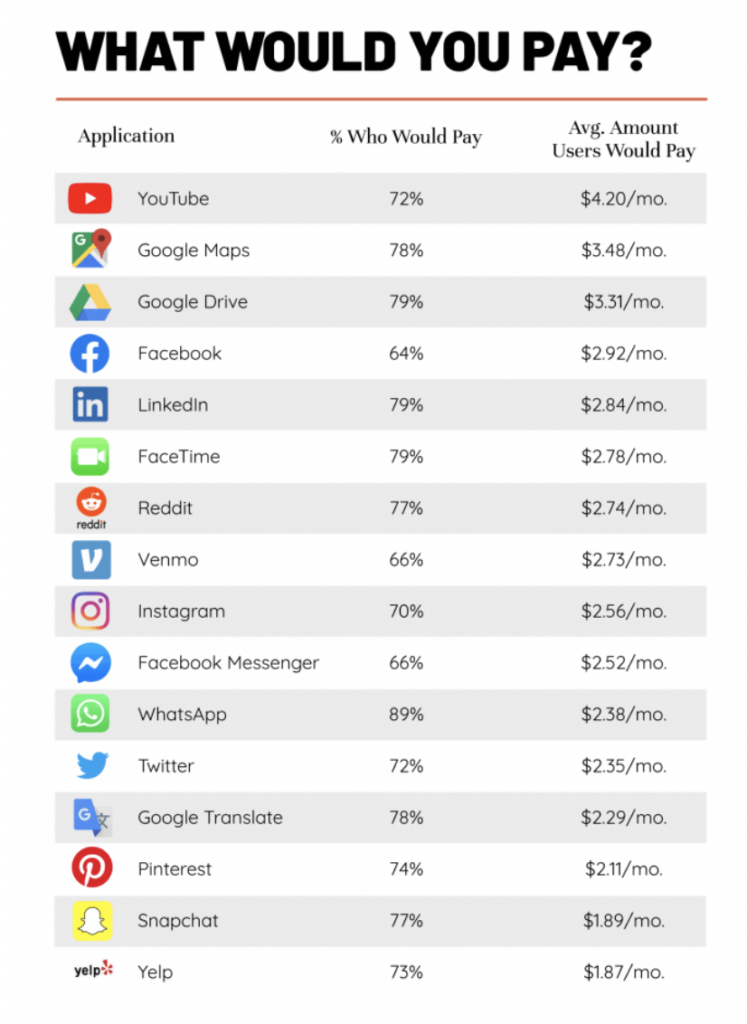 McGuffin also took a hypothetical crack at what they would earn if these sites offered subscriptions as an option to their site:

“Once we gathered data showing what consumers would pay for various apps, we were eager to compare each company’s current advertising revenue against what they would hypothetically earn if they charged the percentage of users willing to pay the average amount respondents established per app.

Per this analysis, all nine companies for which we projected revenue would stand to earn more in a hypothetical paid future. That includes Facebook, which had the highest percentage of users report they wouldn’t pay anything for the app.

There are countless factors that influence consumer behavior over time, even when a business model is static, let alone when it undergoes a change of this magnitude. Our goal was not to provide a roadmap to greater technology-industry profitability, but to instead show that our digital world has upended the old idea that there’s no value in receiving something for nothing.” 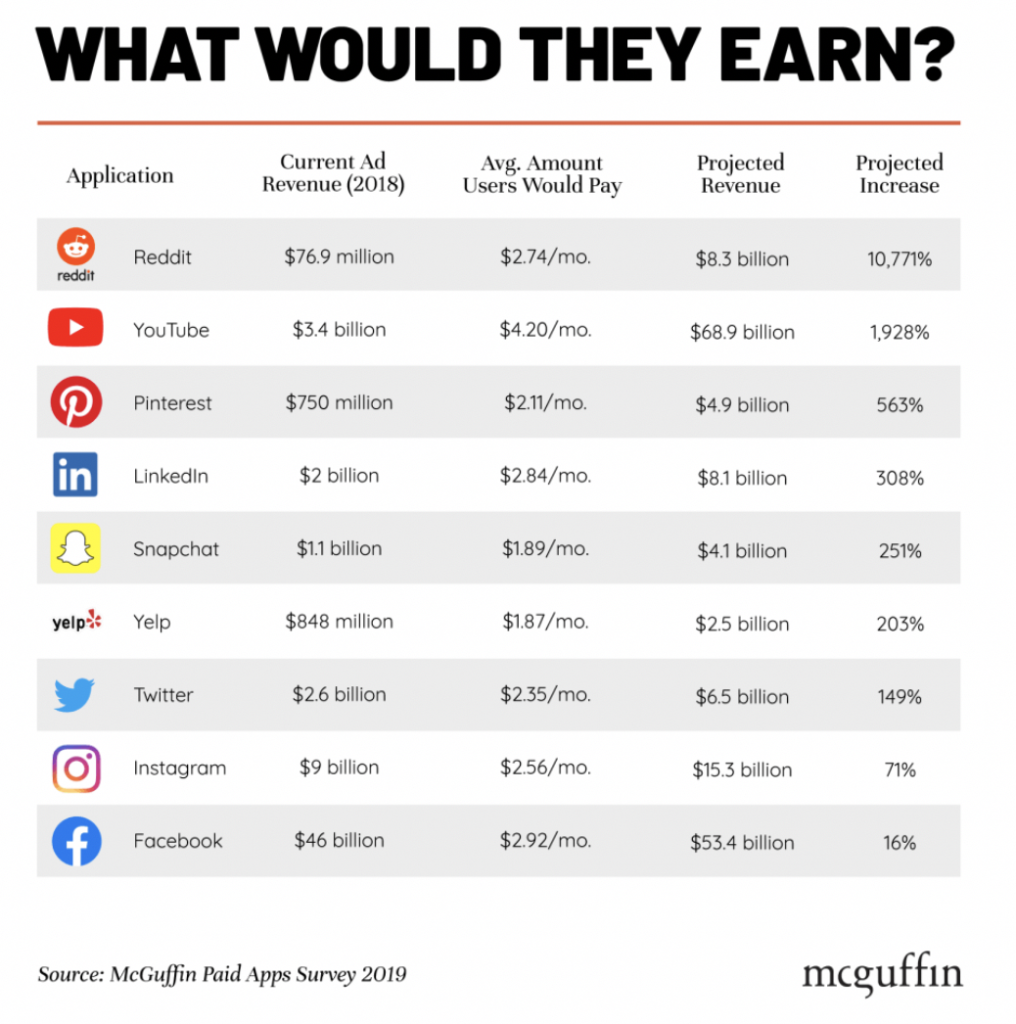 While I realize this chart on projected earnings is purely hypothetical, the survey of what people would be willing to pay for any of these sites listed in the first survey is an eye-opener.

These charts are interesting in that it begs the bigger question about the potential for an expanded business model for these sites. Free sites offered to the mass consumer will always win. But the first chart, which shows that there is a real willingness to pay a low subscription fee for ad-free content, could and should be considered as part of these company’s business plans for growth.

This particular survey from the McGuffin Creative Group needs some serious scrutiny from the companies mentioned in their survey, as well as others who today only make money just by ad revenue. Even if the first survey showed only perhaps 40% of their users, instead of the over 70% who would be willing to pay a small fee for access to the site, it suggests that these companies are leaving money on the table now that could impact their bottom line.

As McGuffin’s survey analysis points out, the idea that a free site does deliver value for nothing is no longer valid.

It could also be said that a more informed and highly interactive user base has come to realize the importance of these sites to their digital lifestyle. Consequently, people seem to be willing to pay small amounts for these services and it would be worth testing this out to see if they can adjust their business models in the next few years to reflect these changing views of their customers.