Despite the positive reviews from the Wall Street analysts about Facebook’s ability to survive and prosper after Mark Zuckerberg’s testimony before Congress, I was not surprised to see the revealing data that Ben posted this past week. In fact, I found it somewhat refreshing in that it demonstrated how Facebook users are smarter than many think. 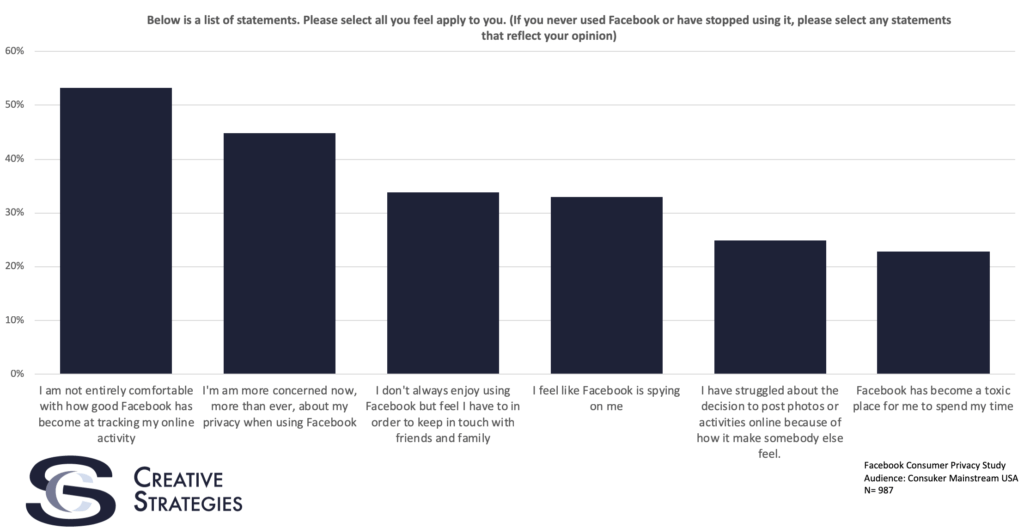 While I had no market data of my own, I had a strong sense that the company’s support would erode, just based on simple common sense and a basic understanding of what makes a product successful. There’s no denying that as a product Facebook has had much going for it. It’s been able to provide a lot of value to those that want to keep in touch with relatives and friends in a new light-touch way – something between a yearly holiday letter and personal interactions. Customers loved it and brought their friends on board in record numbers.

But then something happened. Yes, we all know about Cambridge Analytica and the Russians. As disgusting as that was, it raised awareness and an opportunity to hear what Facebook was going to do about it. Mark Zuckerberg appeared before Congress with all eyes glued to his testimony. Up to that point many of us might have forgiven him, as disappointed as we were. But in his appearances before Congress and in subsequent interviews, Mark Zuckerberg and Sheryl Sandberg flubbed their test.

In all their appearances they both managed to create a distaste for their personal characteristics as they dodged the questions and responded with obviously rehearsed responses. They both came across as insincere, evasive, and at times unlikeable. They feigned ignorance and kept saying they’d have to get back with answers. And they said that trite phrase, “We take this very seriously,” but then never showed it in their actions. They came across as being well-rehearsed with canned answers, clearly overly coached by their PR team.
And it hasn’t stopped. Just this past Wednesday in an op-ed piece in the NY Times, Dr. Zeynep Tufekci wrote,

“Last month, Ms. (Senator Kamela) Harris further grilled Sheryl Sandberg, Facebook’s chief operating officer, on this point, demanding to know how much inauthentic Russian content was on Facebook. Ms. Sandberg had her sound bite ready, saying that “any amount is too much,” but she ultimately threw out an estimate of .004 percent, another negligible amount.”

What Mr. Zuckerberg and Ms. Sandberg completely miss is understanding why people use a product. Yes, it’s the value that the product provides, but it’s also the company behind the product. Users want to like those companies they do business with. When they find strong distaste for the company, it doesn’t matter how good the product is. People will desert them.

As I speak with other Facebook users, just an anecdotal sample among family and friends, the consistent reaction I get is disgust with Facebook and its executives’ behavior, a loss of trust and an increasingly distaste for the product.

Facebook is no longer a place many feel comfortable hanging out. Users feel vulnerable to every like or click and now wonder how they’re being taken advantage of. It’s the same feeling you get wandering down a dark alley at night unsure of what lies ahead or lurks around the next corner.

With each new revelation after the Congressional testimony, we learned Facebook was doing things that were much worse than we even imagined then. They are not only tracking and selling their users’ data as we expected, but they’re also tracking people across the web, including those that are not Facebook users. Then we learned that they’re accessing members’ address books, ostensibly to help them better connect with their friends, only to harvest the address book data and sell that to advertisers without permission or clear disclosure. And most recently we learned that 50 to 90 million users had their logins and other information stolen.

Whenever they had the opportunity, they compromise privacy for profit without telling us or asking us for permission. With each action, they erode trust further, to a point where more and more are saying “enough is enough.”

Choosing to use a product always involves a balance between the product’s value versus its cost, whether it’s the cost to buy or the cost to one’s privacy. Facebook’s behavior has shifted that balance so that the scale now tilts in favor of just abandoning them forever.

I expect we’ll see an increasing number of users abandoning Facebook. These graphs provide proof that it’s begun when more than half are uncomfortable about the company and a quarter believe it’s become a toxic place to hang out. It didn’t have to be, but their executives thought they were invulnerable and greatly miscalculated the intelligence of their users.

Phil Baker is a product development expert, author, and journalist covering consumer technology. He is the co-author with Neil Young of the forthcoming book, “To Feel the Music,” and the author of “From Concept to Consumer.” He’s a former columnist for the San Diego Transcript, and founder of Techsperts, Inc. You can follow him at www.bakerontech.com.

Other Stories By Phil:

China vs. US Manufacturing Follow Up
Tariff Wars and Tech Made in the USA
The Solitary Inventor

See All Posts by Phil Baker