As I wrote a few weeks back, the gaming market is very large and extremely diverse. People spend extraordinary amounts of time and money playing games across an increasingly broad range of devices and platforms. From marathon gaming sessions on tricked out desktop PC gaming rigs, to snippets of game “snacking” on smartphones while standing in line or killing time in other situations, digital gaming has become a mainstream part of our culture.

In fact, gaming has become so popular that it’s created an entire ecosystem of gaming-related content and other activities, such as professional gaming eSports, that have proven to be enormously (though sometimes a bit surprisingly) popular as well. Game streaming video networks like Twitch here in the US, or Douyu over in China, draw enormous audiences measured in the millions on a daily basis for the live game streams they typically show. Similarly, Google’s YouTube and the China-based Youkou Tudou now host an enormous amount of recorded video content created by both professional and amateur gamers for others to watch.

In a recent survey by TECHnalysis Research on gaming trends among US and Chinese consumers, we discovered that US gamers who participated in the survey said they watched about 12 hours of gaming-related content a week between Twitch and YouTube, while Chinese gamers averaged 11 hours between Douyu and Youkou Tudou. They’re impressive numbers to be sure, but they’re downright staggering when you add them to the average 65 hours of gaming time (in the US) or 47 hours (in China) they said they did as well on a weekly basis. To be clear, these numbers were self-reported (and a series of checks were put into place to try and make them realistic), but they’re likely too high. Still, regardless of the exact numbers, it’s clear that gaming and related activities takes up an enormous amount of many people’s non-sleeping hours.

On top of that, a surprisingly large group of gamers said they created gaming content through their own live-streaming efforts and/or uploading of their own recorded games. As Figure 1 and 2 show below, this is particularly true in China, where PC-based gaming is even more popular than it is here in the US. 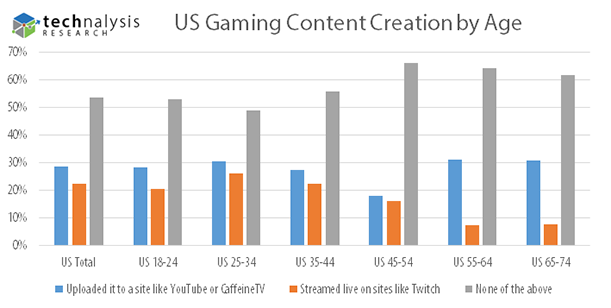 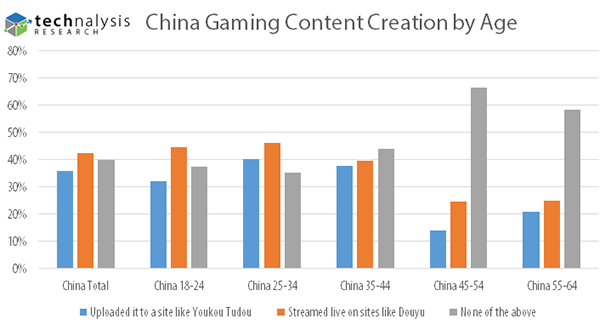 Fig. 2
As you can see, creating original content is still done by a bit less than half of the US respondents (the numbers add up to more than 100% because some people both live-streamed and uploaded content), whereas only 40% haven’t tried it in China yet. What’s particularly interesting, though, is that the practice is remarkably strong in both countries up through the 35-44 age group—it’s not just millennials that are doing it.

Similarly, it’s not just millennials who are participating in gaming competitions and watching professional gaming via eSports TV shows and events. Driven in part by the popularity both of gaming and gaming content, the eSports phenomenon has taken many by surprise. As the survey results indicate, however, it’s also very popular with many gamers, with around 65% of US gamers and about 82% of Chinese gamers saying they had watched or even attended a professional gaming event. Watching those tournaments also clearly inspired many gamers to participate in their own gaming competitions, just as watching other professional sports often encourages participation in them. An impressive 66% and 65% of US and Chinese participants, respectively, said they had participated in either a PC, smartphone, or game console-based competition. Again, the participation rates stay fairly consistent through the 45-54 age group in the US and the 35-44 demographic in China.

Obviously, there are limits to how far the gaming phenomena can extend and there are some people who are already facing challenges with balancing their game time with the rest of their lives. Still, it’s apparent that gamers feel very passionately about their hobby and it’s equally apparent that it represents a lucrative opportunity for companies who can tap into that passion. Given the level of engagement that many people have with gaming, and the growing ecosystem that now surrounds it, that opportunity is sure to last for many years to come.

(You can download highlights of the TECHnalysis Research Multi-Device Gaming Report here.)