How Scooters are Rewriting our Views of Personal Transportation

Now long after the original Segway was launched, I had the privilege of being able to test one. I had met its creator, Dean Kaman, at a dinner in San Jose a year before the Segway launch. Others who had actually been told about it like Steve Jobs and noted venture capitalist John Doerr, who went on record saying they felt this product by Mr. Kaman would be a game changer.

While the Segway did make a splash and did get interested as a short-range mode of transportation, it never took off. In fact, it was even banned in some cities for use on sidewalks as it was a nuisance to pedestrians and deemed unwelcome in many other cities who refused to let people use them on city streets.

But the one thing that the Segway did is to introduce what is called last-mile transportation link. And it has birthed the current “ last mile” mobile electric vehicle of the moment in the scooters that populate the streets and roads of many cities today.

The chart below shows the areas of the world where scooters are taking off. 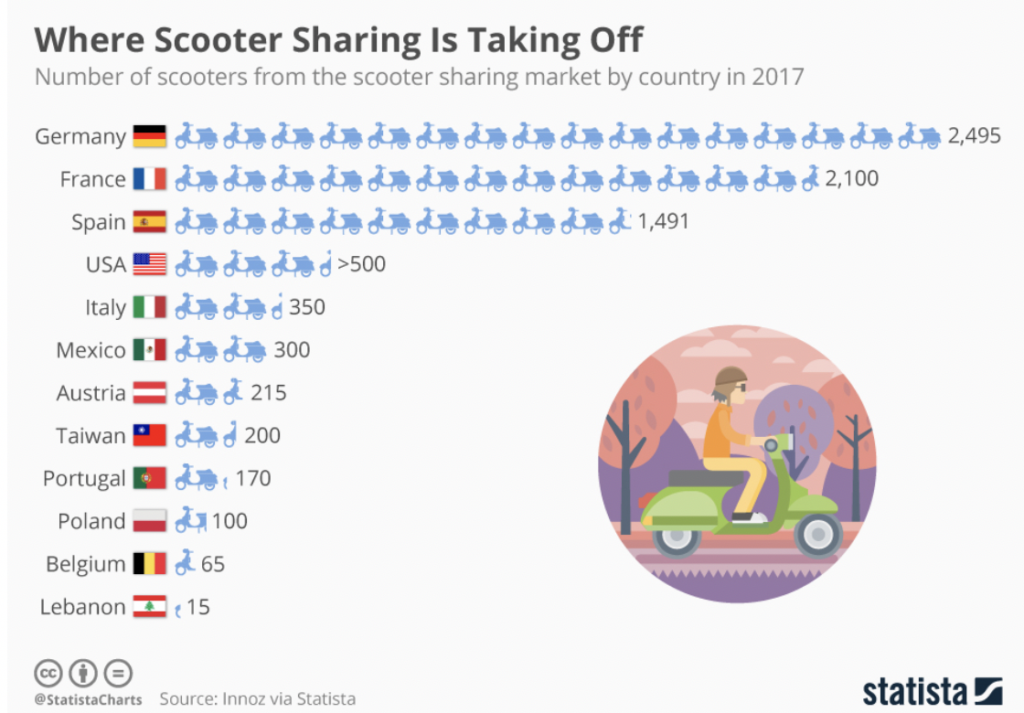 Here in the US, they are also populating large cities, but in many, they have become controversial due to three key factors.

First, without any regulation, scooters, like the ones from Bird and Lime, started showing up in huge numbers in large cities and were more a nuisance than a welcomed vehicle for last mile journeys. Many cities banned them outright in order to develop rules and regulations guiding their use in these cities as well as make companies bid for the chance to place their scooters in these towns. Most cities now have solid regulation in place to control how many can be placed in a city, as well as having the proper insurances and guarantees that they are picked up at night to keep the sidewalks from being clogged and scooter’s under a semblance of control.

Second, is the fact that they can be dangerous. These scooters, while not speed demons, do travel at around 15 miles an hour and if you fall off at that speed, you could be injured. The chart below lays out the most common injuries. 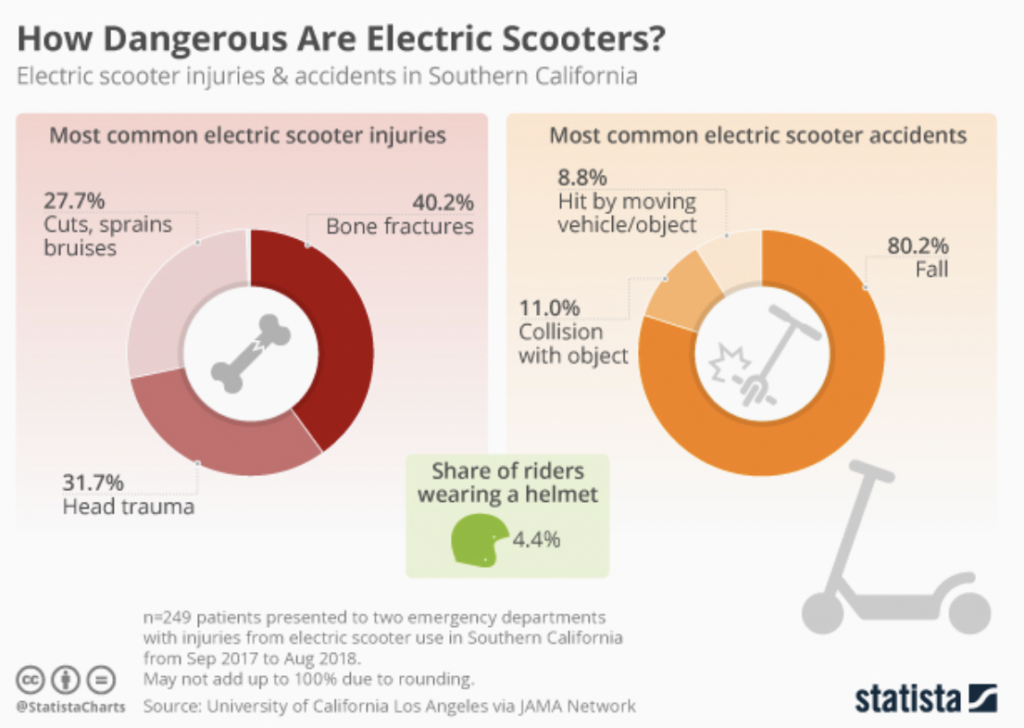 “CNET spoke to trauma centers in Denver, San Diego, San Francisco, and Austin. All reported an uptick in injuries from scooter accidents. It’s been just a few months since the vehicles were unleashed onto city streets, so emergency room doctors say they’re only beginning to collect data.

“We see some scary injuries,” said Dr. Chris Colwell, chief of emergency medicine for Zuckerberg San Francisco General Hospital and Trauma Center. “There’s still a lack of recognition of how serious this can be.”

Colwell said his emergency room is logging about 10 injuries a week. They range from extensive bruising to severe head trauma. Given the hills in San Francisco, he also sees a lot of road rash. “We saw a guy who fell over on his back this week,” Colwell said. “He ended up going through so many layers of skin, and we had to essentially put him to sleep to clean out the gravel embedded in his back.”

“The vast majority of the injured were riders as opposed to pedestrians. They averaged around 34 years of age and were 58 percent male. The study revealed a general lack of operator adherence to traffic laws or warnings by the scooter companies themselves, according to an article published Friday in JAMA Network Open. Though scooters can reach 15 mph, less than 5 percent of riders were reported to have been wearing helmets.
About 40 percent of patients had head injuries, and almost 32 percent suffered broken bones. The study said a significant subset of the injuries occurred in patients younger than 18.
The researchers don’t try to compare your chances of getting killed on (or by) a scooter versus a car, but rather the physical damage being wrought. And how did these 249 California riders get hurt, exactly? More than 80 percent just fell off, according to the study. Eleven percent hit something.”
https://www.bloomberg.com/news/articles/2019-01-25/electric-scooter-injuries-pile-up-but-lawsuits-are-hard-to-make?cmpid=BBD012519_BIZ&utm_medium=email&utm_source=newsletter&utm_term=190125&utm_campaign=bloombergdaily

This is a significant issue and one that will plague scooters for years unless riders do more to protect themselves, such as wear helmets and even knee and elbow pads when riding.

The third area is the business model. The Bird and Lime scooters cost around $550 each and have a life span if only around 1-2 months at best.

ExtremeTech talked with Quartz Report’s Ali Griswold, who did a study on one of the scooter programs in Louisville, KY-

“Quartz reporter Ali Griswold performed an analysis on revenue-per-scooter using open data sets provided by Louisville, KY. The question of how much revenue companies earn per scooter is an interesting one.

“Griswold’s analysis was made possible by the fact that the initial Louisville KY data sets included a unique identifier for each scooter, allowing her to track how long the vehicles persisted in the city. Later data dumps have removed this modifier, likely to prevent the kind of analysis she performed.

What she found is that the average scooter lived 28 days, with a median lifespan of 23 days. Focusing only on the oldest vehicles in the data set improved this slightly, to 32 and 28 days, respectively. Using the oldest vehicles for a baseline and excluding December data (her data set ran from August – December), the median vehicle took 70 trips over 85 miles.

When you run through the various costs and revenue, there’s just no way these companies are doing anything but losing huge amounts. The average revenue generated per scooter in Louisville, at least, comes out to between $65 – $75. Data available elsewhere online suggests each scooter costs Bird $551. The company wants to get that down to $360, but even so, it’s losing $285 – $295 per scooter deployed in the Louisville area.”

I have read other stories on the economics of the on-demand scooter business, and they all question the business models and if they can ever be profitable and sustainable.

There is another interesting economic model around scooters developing, and that is one in which a person buys a scooter and uses it as needed for last mile transportation.

Although I have used a Lime Scooter once or twice for short distance travel, last fall I tested the Element Folding Electric Scooter from Jetson.

If you were going to use this a lot, then the Quest would be the better purchase. But in my case, the Element meets my needs as I mostly use it to go to the local grocery store, and around the neighborhood, although I have packed it in my trunk and taken it with me to Downtown San Jose and used it there to travel short distances to meetings.

The lightweight of the Element makes it easy to put in my car’s trunk, or in the bottom of the grocery cart at the store. Portability is very important to me and having something like this in my car for last mile journeys has been quite useful.

Both Jetson Scooters get high ratings, and so far the Element has held up well over the six months I have been using it. Of course, many other companies, such as Segway, Xiaomi, Razor, Gotrax, Gilon and others see the market for personal scooter usage and are ramping up new models for our market.

I am pretty health conscience as well as balance challenged so I won’t use the scooter without a helmet and at least elbow pads. But so far I have had no major issue with the Jetson Element and continue to use it as needed.

While owning one’s own scooter is not for everyone and the on-demand model that Bird, Lime, and others are using has merit, especially in big cities where getting to a location fast and easily is called for, I have a sense that the ownership model has some serious legs and could become one of the more interesting way’s scooters are used in the future.