Covid-19 dramatically acerbated the current economic recession that the US and many countries around the world are facing. Yet, workers across different segments were already starting to see the impact technology is having in changing current roles, creating new job functions and requiring new skills to get a job as well as progress in your career.

I have written in the past about how companies like IBM are preparing the current and future workforce for digital transformation, something I find some companies in tech feel responsible for, and rightly so, given the role they play in transforming the workplace through technology.

The current environment created an urgency we had not felt before, mostly because the change that we thought was going to occur gradually has happened over a couple of months due to Covid-19. That “two years of digital transformation happening in two months,” Microsoft CEO mentioned just a while ago, is already having an impact on workers. 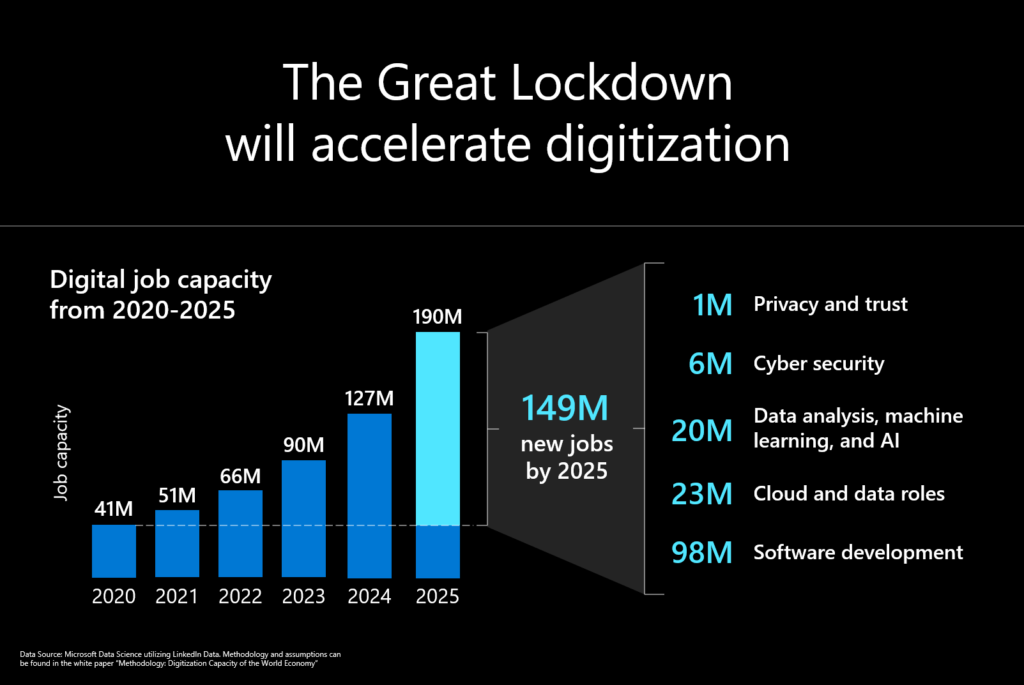 This, coupled with unemployment figures that exceeded what the US experience during the Great Recession in the 1930s, means that as much as we want to reopen the economy, many people will not have a job to return to.

During a video event announcing the launch of a new initiative to upskill 25 million people, Microsoft CEO, Satya Nadella, made it clear that for the economy to recover fully “we must ensure no-one is left behind” and this means empowering people to be the best they can be and do the best job they can.

Covid-19 has been impacting Communities of Color in the US more acutely than any other community, not only by taking more lives but also by suffering the most with the unemployment crisis coming out of the pandemic. If you are wondering why this is the case, you only need to refer back to Nadella opening remarks on racism and social inequity. The higher number of deaths among People of Color can be explained by the lack of access to good health services and the higher number in unemployment is linked to lack of access to education and an attitude from some employers that see People of Color as more disposable than white workers. Nadella’s statement was strong and clear: “There’s absolutely no place for hate, bias or racism in our world, the cracks of injustice and inequity in our society hinder progress for everyone. And call on us to act.” 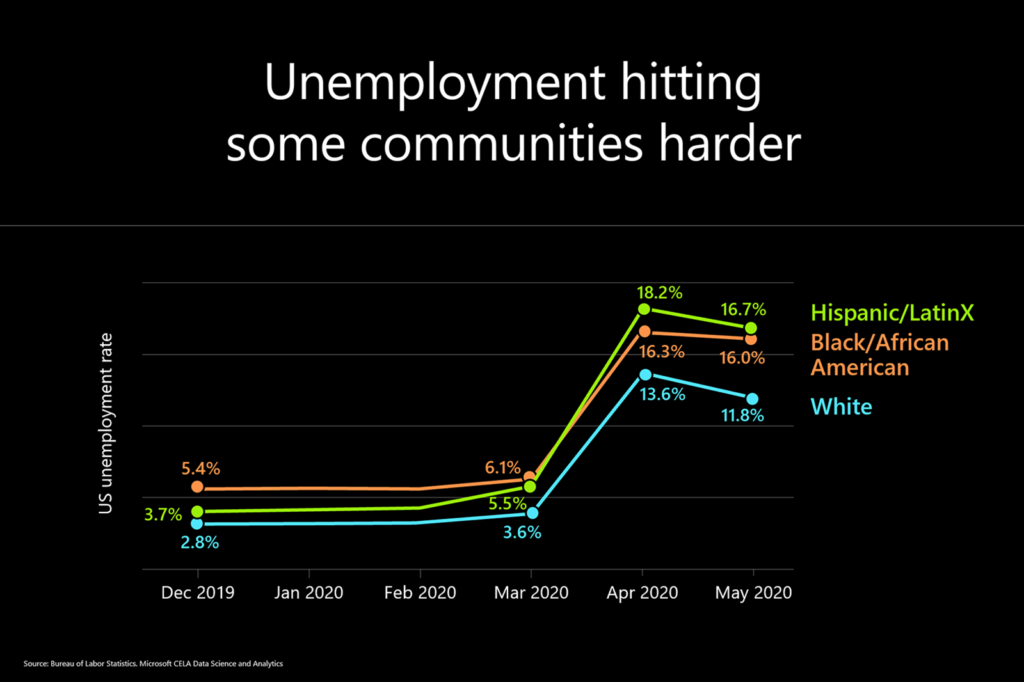 Brad Smith pointed out during the event that over the next five years, nearly 149 million new tech jobs will be created in fields like software development cybersecurity and machine learning. For those jobs to become an opportunity for people, however, Microsoft feels there needs to be more focus on training, and, to some extent, this requires a shift in how employers think as, over the last 20 years, employer investments in employee training have been declining.

The problem, as you can see, is a complex one, and Microsoft is tacking it from two fronts: on the one hand, providing tools for people to get the skills and qualifications and for employers to have access to more data to make informed decisions.

For upskilling, Microsoft is bringing together every part of the company LinkedIn, GitHub and Microsoft and will focus on:

Through the same assets and the use of the Economic Graph, Microsoft is also aiming to use data to identify in-demand jobs and the skills needed to fill them so they can create learning paths for these via LinkedIn Learning. Using this data, they identified ten jobs that are in-demand in today’s economy and are well-positioned to continue to grow in the future. These ten jobs were identified as having the greatest number of job openings, have had steady growth over the past four years, pay a livable wage, and require skills that can be learned online.

As part of the training resources, Microsoft is also providing low-cost access to industry-recognized Microsoft Certifications. To expand the reach, Microsoft is also providing $20 million in financial grants plus technical support to nonprofit organizations around the world so that they can support with complementary initiatives. Five of the $20 million will be dedicated to nonprofit in the US aimed at alleviating the impact among those who, as data shows, are hit the most by unemployment, which is both People of Color and women and, in particular, Women of Color.

When it comes to social issues such as unemployment, we know the solution is not just within the private sector. This is why Microsoft pledged to make more reliable analytics available to governments around the world if those governments are willing to open up public data sets and look at innovating government systems around workforce training and education.

This is an ambitious initiative on Microsoft’s part; there is no question about it. The thought the leadership put into breaking down the problem to come up with solutions that leveraged their assets and would have the most significant impact gives me confidence in the success it will achieve.

Microsoft’s mission is to empower every person and every organization on the planet and this cannot happen without the company owning up to the impact technology is having on the world as well as the responsibility it has to use its power and wealth to impact society positively. I look forward to seeing other tech companies stepping up and follow suit.