At this point, everyone understands that the COVID-19 pandemic has had a profound impact on all aspects of society, including our personal and professional lives. But just as our understanding of how the virus spreads and its impact has shifted over time, so too has our perception of exactly how that impact is being felt in different areas.

In order to better understand specifically how the pandemic has affected IT environments in US-based medium businesses (100-999 employees) and large enterprises (1,000+ employees), TECHnalysis Research embarked on a study last month of over 600 US-based IT decision makers. Survey respondents were asked a number of questions about what their companies’ strategic and spending priorities were before the pandemic at the beginning of the year, and what they are now several months into the pandemic. In addition, respondents were asked how they expect their work environments to change, how they are acquiring and deploying PCs for their employees, how their cloud computing and app modernization efforts are evolving, and much more.

Needless to say, the results were fascinating. At a high level, one of the most interesting discoveries was that despite many dire early warnings, IT spending plans for the year are generally still intact with average annual IT budgets expected to increase 7% for this year. From a change perspective, as Fig. 1 illustrates, that means the overall levels are expected to be down just 1% versus what they were expected to be at the beginning of the year. Breaking it down by company size shows that medium-sized businesses are now expecting their IT budgets to grow slightly, while large enterprises are expecting a larger 2.3% drop overall. 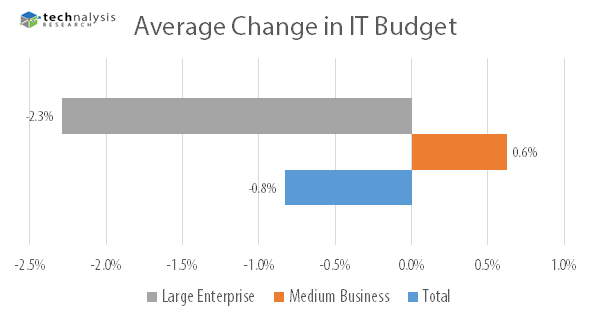 Priority-wise, what’s clear from the data is that companies shifted their focus from things that would be “nice-to-have” to things that they “need-to-have”. Specifically, this means that from both an overall strategic as well as spending perspective, purchasing laptops for their employees became the top priority, overtaking (at least temporarily) the attention and dollars given to their private, hybrid, and public cloud computing efforts. Conversely, it also means that some of the biggest decreases in prioritization and spending impact highly touted technologies such as edge computing, IoT, and private enterprise cellular networks.

From a PC client perspective, there have also been some very interesting shifts in the acceptance of different deployment and acquisition strategies. Notably, VDI (virtual desktop infrastructure) usage—which many have downplayed in the past as a backward-looking technology—has seen growth of over 11% since the start of the year. In addition, after appearing to have fallen out of favor, BYOD (Bring Your Own Device) programs—where employees purchase and use their own PCs—are now in place in over half of the companies that responded to the survey. Obviously, many of these changes are driven by the massive work-from-home experiment that IT departments around the world have had to immediately respond to. However, given the widely touted productivity levels that many people have reported working from home, many of those policies are likely to stay.

What’s also likely not to change is a dramatic increase in people who want to continue working from home. As Fig. 2 illustrates, on average, companies expect to have just over 1/3 of all employees still working from home into next year. 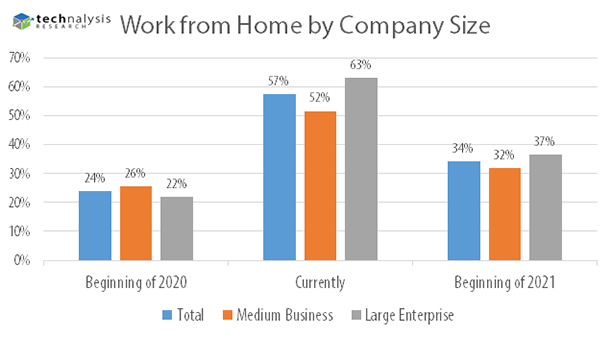 Once people go back to the office, they’re also likely to see some dramatic differences when they get there. In fact, only 12% of respondents don’t expect changes to their work environments, meaning 88% do. Anticipated changes include increased sizes of work areas and cubicles, physical barriers between work areas and cubicles, and shifts from open office environments to traditional office/cube arrangements. In addition, about ¾ of respondents expect their companies to adjust the amount of real estate they have. Interestingly, medium-sized businesses expect to increase their amount of office space in order to accommodate more space per worker, but respondents from large enterprises felt their companies were more likely to close some offices and have less real estate.

Of course, as recent news has highlighted, the virus and its impact continue to evolve, so there’s no great way to know exactly how all these different factors play out until time passes. Overall, however, it’s clear that, from an IT perspective, the reactions to and impact from the virus so far are less severe than many feared. In addition, one positive side to the pandemic is that companies are throwing out their old rule books and looking at all the various technological tools at their disposal with a fresh set of eyes. In addition, many organizations plan to aggressively adopt more advanced technologies as a means not only to survive but to thrive in our new normal.

Technology, in its many forms, has proven to be a real saving grace for many organizations in these first few months of the pandemic. As a result, company leadership recognizes the importance of IT initiatives and will likely continue to allocate resources there into the foreseeable future. This isn’t to say we won’t see big challenges for some tech, particularly for IT shops and tech suppliers to hard-hit industries like travel, entertainment, etc. For the IT departments in many businesses, and most of the major tech vendors supplying them, however, the opportunities even in these challenging times continue to be strong.

(You can download a free copy of the highlights of the “Pandemic-Based IT Priority Shifts” report here. A copy of the complete 75-slide study is available for purchase.)