One of the few benefits many people have experienced as part of the great work-at-home and learn-at-home experiment that we’ve all been through is improved air quality. In fact, because of the significant reduction in both commuting and travel, both the visual and measured quality of the air has gotten noticeably better in most places around the world.

As a result, the pandemic has inspired a refocus on environmental issues. At the same time, there’s been a huge focus on how digital technology—particularly computing devices, cloud infrastructure, and various types of networks—has allowed us to stay as productive (if not even more so!) as we were prior to the pandemic.

Interestingly, the stories of computing and conservation have also started to become entwined in several different ways. First, there’s been a strong transition to laptop PCs, which use significantly less power than desktops, as many peoples’ primary computing device. While many people think notebooks have been the default standard for a while, the truth is that desktop PCs still represented a fairly significant portion of computers used in many businesses up through the start of the pandemic. However, with the requirement to work at home, companies have been scrambling to get laptops to their employees. As a result, the incredible reliance we have on these more power-efficient devices has never been more apparent. The real-world impact of their increased use is less demand on the electrical grid to power them which, in turn, can offer benefits to the environment.

Second, there’s been a much bigger focus on cloud-delivered apps and services, which can also indirectly lead to an improved environment. In particular, there’s been a great deal more attention placed on modernizing and “cloudifying” applications for business. Because these modernized applications can run in power-efficient cloud-computing data centers, this too has the benefit of reducing the power demands necessary to complete specific tasks.

In a recently completed survey by TECHnalysis Research of over 600 US-based IT professionals, we found that when asked to rank the top 2 priorities for IT initiatives since the rise of the pandemic, modernizing applications is the most important, followed closely by purchasing laptops for their employees. Not surprisingly, growing usage of hybrid, private, and public cloud usage rounded out the top 5, as shown in Figure 1. The app modernization effort, of course, entails the process of converting legacy applications into newer app formats that can run efficiently in one of these hybrid, private and/or public cloud environments. 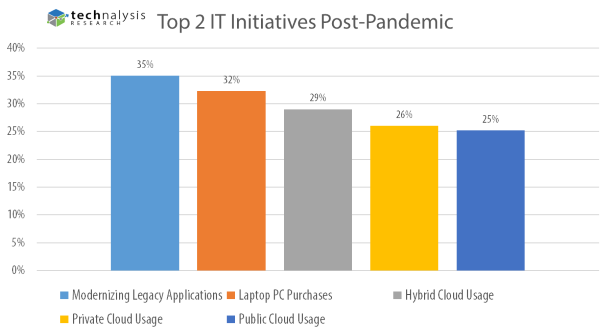 What’s interesting about these developments from a conservation perspective is that there have even been studies which show that cloud-based computing resources are more energy efficient than many people realize. In fact, thanks to a combination of significantly more controlled usage of computing, storage, and networking resources in large cloud data centers, new types of computing (and pricing) models that use those resources more efficiently, and the growing use of more power efficient CPUs, there have been great improvements in computing power per watt. In other words, with cloud computing, it’s possible to get even more computing work done with the same (or even smaller) amounts of power than were used in the past.

On the notebook PC side, there have been similar trends in power efficiency as well. In fact, just last week AMD announced that they surpassed their 25×20 goals set back in 2014. Specifically, the company announced six years ago that they wanted to improve the power efficiency of their mobile CPUs by a factor of 25 before the end of this year. With the release of their recent Ryzen 7 4800H mobile processor, the company actually achieved an impressive 31.7X improvement in power efficiency—specifically a 5x increase in performance combined with a reduction to 1/6th of the required power—versus a 2014 vintage AMD FX-7600P chip.

The improvements are due to a wide range of factors, including better core designs, new chiplet architectures within their CPUs, and the company’s move to 7nm production from the 28nm process used back in 2014. The company also made a number of enhancements to the chip’s thermal design and power management capabilities over the years. All told, it’s another impressive example of how far AMD has improved their technical capabilities and competitive strengths over the last few years.

As companies start to bring their employees back into the office and commuting and travel trends slowly start to tick up, we may begin to see some negative impact on the environment. In terms of computing resources, however, the ongoing developments in power and performance efficiency for both data centers and laptops can hopefully keep their influence to a minimum.