Pressure on Intel and Apple as Qualcomm exits iPhone

Several months back during one of countless analyst calls that Qualcomm was hosting in the middle of the attempted hostile takeover from Broadcom, the company stated as part of a financial outlook that it was “zeroing out” incoming revenue (Qualcomm’s licensing division) from Apple, the company it was fighting in various legal arenas around royalties and IP. This was part of a multi-faceted move to appeal to investors, showing Qualcomm’s ability to remain profitable and growing without intervention from the takeover bid.

At the time most analysts believed that this “zeroing out” of Apple revenue was considered a worst-case scenario, giving the markets confidence in the prospects of Qualcomm’s licensing and chip groups even without one of its biggest customers.

On the conference call following the release of its most recent quarterly earnings, Qualcomm stated that would not be selling modems to Apple for its next-generation iPhones. This was confirmation that in fact, the “zeroing” of Apple income those months prior was less about presenting a hypothetical situation and instead a way to prepare the market and investors for a life without Apple at the purchasing table.

Qualcomm remains in a battle with Apple over royalties that the Cupertino-giant owes for currently shipping devices, and that will continue for the foreseeable future. And even though Apple is not buying modem hardware from Qualcomm, it (and in reality, its suppliers) will still owe QTL royalty fees for the technologies used in devices in the future. There is another story to be told about the current state of the Apple-Qualcomm legal dispute, but for now I’ll leave you with the knowledge that the “beginning of the end” will start later this fall as court decisions being to materialize.

A new paradigm for iPhone

Now that we know the upcoming iPhones will use Intel modems exclusively, moving from a carrier-by-carrier split between Intel and Qualcomm that existed for the last two generations, a new dynamic will be playing out in the smartphone market.

Flagship Android phones that utilize Qualcomm Snapdragon Mobile Platforms like the 845 will have one very specific, distinct, and important advantage that they could not claim previously. Wireless performance, both in straight line speed and at-the-edge reliability, is a feature that will become more important and prominent in 2019 and 2020.

Hardware vendors that compete with the iPhone should be leaning into this. We saw the first salvo come from Qualcomm directly by showcasing the independently gathered Ookla speed test results. In that data we found irrefutable evidence that the wireless capability of flagship Android phones using the Snapdragon 845 was dramatically more robust than iPhones using the Intel modem. It’s an interesting and expectedly aggressive first step in a marketing and messaging machine that is just at the beginning of its torque curve.

Why Gigabit and 5G matter

There are differing opinions on the value of the wireless system in place for smartphones and connected devices. Many have stated that Gigabit-class LTE speeds simply don’t matter for users or user experience. I disagree and believe that speed and latency of wireless connections will only increase in importance with advancement in streaming content, streaming apps, and even more upcoming wireless lifestyle changes. 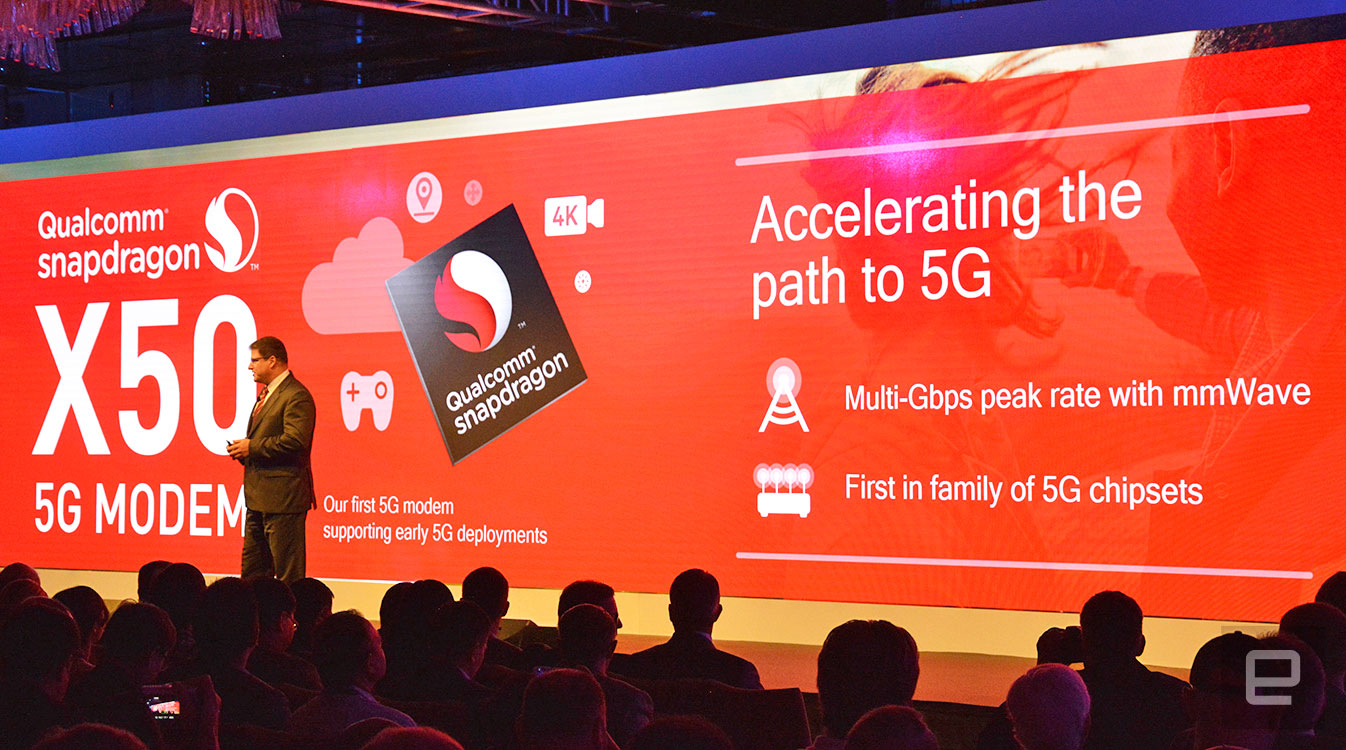 That negative mentality also leans on top speed performance considerations solely, ignoring the arguably more important areas of edge-of-network performance and reliability. When the signal is at its weakest, when you are inside buildings or further away from a cell tower, a better cellular implementation means the difference between being able to stream video or not. In an extreme situation it could allow you to call for help in an emergency…or not.

The upcoming 5G networks will begin rolling out across the globe in 2019 and phone makers are already preparing devices to take advantage of them. Only Android-based phones that integrate Snapdragon modems will support 5G out of the gate. Intel is likely is a full year behind Qualcomm on having similar capabilities or form factors to support all bands of 5G currently planned. That means iPhones will be at least a full year behind the first wave of 5G flagship devices, and that could turn into two years if we look at Apple’s past history of cellular technology implementations. (Note that Huawei is also planning a 5G modem for its SoC.)

Every other smartphone vendor from Samsung to Oppo will have an advertising campaign essentially pre-built against Apple. In a time when consumers are more technology aware than ever before, the iPhone will be behind on cellular performance. As a result, these smartphone vendors need to hit back on Apple, and as a side effect Intel, with the goal of setting the standard higher, changing the story and value of wireless technology for consumers that utilize these devices every day.

You can be sure that carriers like Verizon and AT&T are going to spend money to promote the capabilities of their 5G networks after billions in infrastructure investment. And Apple will not be able to participate in any of that collateral, leaving windows of opportunity for everyone else in the fight.

If Google is paying attention, it will follow suit, creating a campaign talking up the benefits of an open ecosystem of partners that have the flexibility to create, build, and differentiate. Innovation advantages like this don’t happen often against a company with the resources of Apple, so all parties must participate.

With the secret confirmed courtesy of Qualcomm, Intel is now under a significant amount of pressure. It will be the sole supplier of modem and cellular technology to one the world’s biggest companies and the largest mobile device supplier in any ecosystem or geography. Intel will need to step up its game for 4G LTE implementation to avoid more damaging testing and stories for the iPhone line while also accelerating advanced 5G integration to make sure Apple isn’t left behind in that important race.

Is Apple going to drop out of the smartphone race without 5G? Absolutely not. It’s install base, and fanatical community, will suffer through quite a lot to stay inside this ecosystem.

Apple has been able to convince consumers it offers the best of every facet of smartphone technology, from the camera to battery life, to accessories to performance. But with the entire wireless market and consumer base looking towards 5G on their smartphone, their car, their notebooks, factories, drones, and more, it cannot afford to take an extended backseat to competitors.