Tech Manufacturing Moving Out of China at Rapid Rate

I spoke last week with one of my friends who is in Vietnam about the current economic trend there that is helping prop up the Vietnamese economy.

Although not known as a tech manufacturing powerhouse yet, it has become one of the major countries around the world that could evolve to replace some of the Chinese Manufacturers that are caught in a tariff battle with the US today.

According to my friend in Viet Nam, this country sees a huge opportunity to steal away some tech manufacturing from China. Their government is working closely with ODM’s who have manufacturing facilities in China, to help them expand older tech factories that have set idle for years or build new ones.

At the moment, Vietnam has mostly been known as a manufacturer of apparel and shoes. But that looks like it will change. Already, some of the top PC makers have started to move some of their final assemblies of products to Viet Nam to get around any current or future tariffs.

In the chart below, it shows that U.S Imports from Vietnam have surged by 38% with a total of $20.7 billion products shipped to the US from its ports. 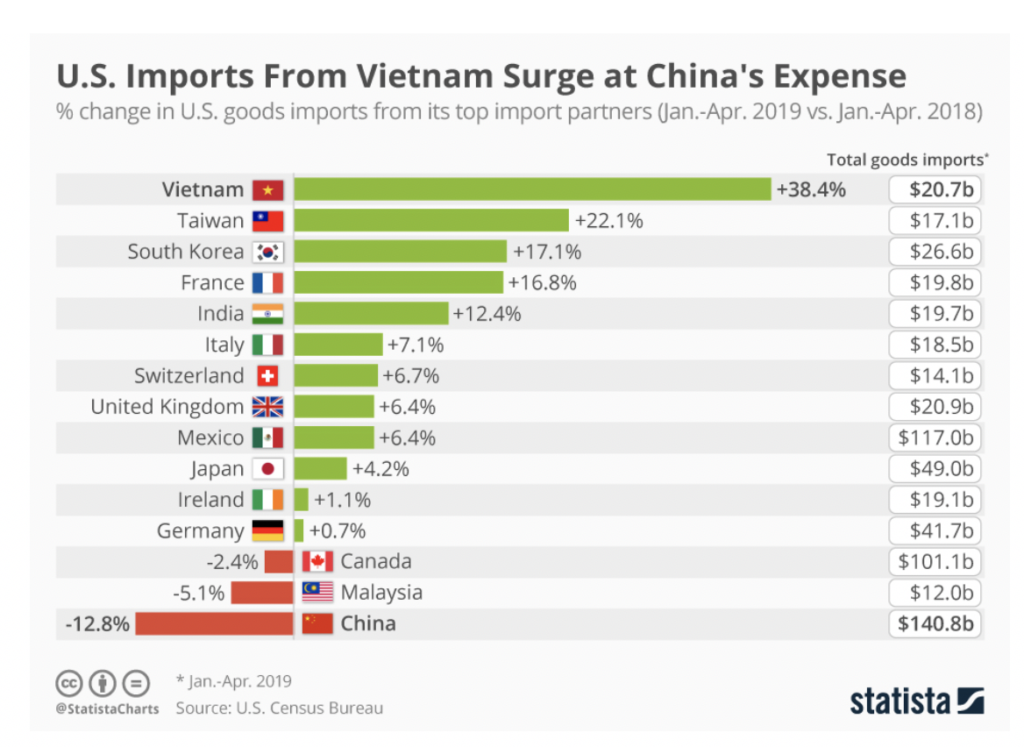 This chart also shows that in China, imported goods from their ports are down by 12-8%, although at this time it is more related to the tariffs than any mass exodus of manufacturers.

But for China, any serious move of manufacturing out of China will have serious ramifications long term for their economy. One of the reasons China has had such a good economy is that it propped up their manufacturing programs and used it to help get a younger generation of agricultural workers into new cities and get them better jobs.

This program started over 20 years ago. At the time, much of China was still very agricultural, and kids who were born in this environment were making about $10 a week and still living with their parents. China knew that this could lead to serious unrest and put in place a program to get them off the farms and into low to mid-level skilled labor jobs, especially in factories.

China also wanted to expand certain cities to make them manufacturing hubs and give them special trade designations so that manufacturing firms outside of China would be enticed to invest in China and create new factories, especially for tech products.

This program worked exceptionally well. These factories recruited millions of kids from the farms and in most cases, gave them a wage of about $100 a week, instead of $10. Most lived in company subsidized dorms, so they ended up with real buying power. The longer they stayed working in the factories, the better it has been for them to learn and advance. Through this process, they have increased their wages, and this, in part, has helped them drive a middle class in China that has dramatically driven their economy.

As you can imagine, losing even 10%-20% of manufacturing to places outside of China will have an impact on their economy. This is why China has a lot to lose in this tariff war and has started a major push for the Chinese to buy mostly Chinese made products to help bolster its manufacturing base.

I am hearing that the Chinese Government is threatening to penalize manufacturers from Taiwan, Korea and other Asian regions who have factories in China if they begin shifting a lot of their customers work from their Chinese factories. This is the early stages of discussion within the Chinese government, but one could imagine if their manufacturing base is genuinely threatened, a move like this would be highly plausible.

In an article in the New York Times, NYT reporter Keith Bradsher wrote a good piece entitled “A China-US Trade Truce Could Enshrine a Global Economic Shift” in which he argues:

“even a fragile truce could have lingering implications. The United States would keep in place broad tariffs on Chinese goods for months or perhaps years to come. Global companies would almost certainly respond by continuing to shift at least the final stages of their supply chains out of China. Uprooting an entire supply chain is a nightmare task,” said Jon Cowley, an attorney in the Hong Kong office of Baker McKenzie, a global law firm, who advises corporate clients on tariffs and supply chains. “It takes years, if not decades.”

President Trump warned this past week that he was concerned about the influx of goods from Vietnam. The surge could invite scrutiny from the Trump administration if it believes that companies are pretending to make products outside China but are simply clipping together Chinese-made parts.

Still, China has few options to stop those shifts. Trade between the two countries is so lopsided that China has many fewer American imports to tax. It could slam American companies that sell vast amounts of products in China, like Apple or General Motors, but pinching those companies could hurt the Chinese workers who make those products.

As this article points out, many US manufacturers see only instability with China and the US and now believe that regardless of these tariff pauses, the handwriting is on the wall and they need to seriously consider moving the manufacturing of a significant portion of their US-bound products out of China, starting now. It will happen slowly, but I sense that the Chinese manufacturing boat has turned around, and more and more manufacturers will begin looking for new places to make their products in the future.