The Evolution of Portable Entertainment

As a technology analyst and consultant, I have had the chance of not only studying and chronicling the world of technology but, once in a while, I get involved in a consulting project that I feel could have a specific impact on the world of Tech.

One such project I was involved with was one of the first MP3 media players brought to market by Diamond Multimedia in 1988. I was brought into the project by a friend of mine who had moved from Apple to Diamond as he saw the idea of an MP3 player being the next big thing in portable music. This was a few years before Apple introduced the iPod. At the time, the leading mobile music player was the Sony Walkman. Also around that time, Napster came to market with its digital music ripping system, and my friend and his boss foresaw a need for a portable MP3 music player, so Diamond harnessed this idea and created RIO PMP300.

But the Recording Industry of America (RIAA) was not happy about this product.

Wikepdia has the details of RIAA’s response to the RIO PMP300:

“On October 8, 1998, the Recording Industry Association of America, filed suit and asked for a temporary restraining order to prevent the sale of the Rio player in the Central District Court of California, claiming the player violated the 1992 Audio Home Recording Act. See RIAA v. Diamond Multimedia.

Judge Andrea Collins issued the temporary order on October 16 but required the RIAA to post a $500,000 bond that would be used to compensate Diamond for damages incurred in the delay if Diamond eventually prevailed in court. Diamond then announced that it would temporarily delay shipment of the Rio.

On October 26, Judge Collins denied the RIAA’s application.[3] [4] On appeal, the Ninth Circuit held that the Rio’s space shifting was fair use and not a copyright infringement.[5]

The chart below illustrates the history of portable music from the days of the Walkman to today. Interestingly, it does not include battery-powered Boombox’s, which could also be portable, as well as portable radios that go back to the 1940s that teenager’s danced too well before the Sony Walkman came onto the scene. 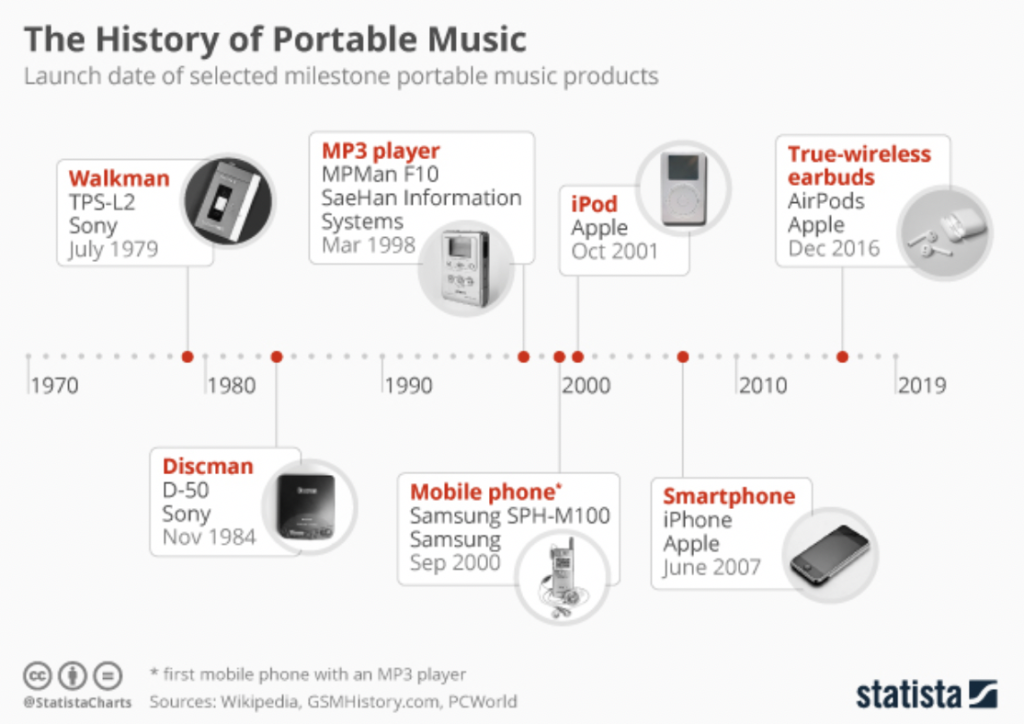 Apple’s iPod was the real game-changer because it made it easy to get ripped songs onto a portable music device. That was one of the big flaws of Diamond’s RIO PMP300. Getting ripped songs onto it was very difficult. Apple created software that ran on the Mac that would allow you to copy your music from a CD easily and then transfer it to the iPod. This eventually led to Apple creating a dedicated music store for direct downloads and along with Apple supporting this process on a Windows PC too, the iPod took off and became the top portable digital music player for almost a decade.

With the iPhone, Apple created the next major portable music platform that has now eclipsed the need for a dedicated MP3 player and, along with streaming music services, smartphones have emerged as the go-to portable media player today.

In 1981, the music industry, via MTV, launched an important milestone for music performers. It helped birth what has become the music video and allowed music artists around the world to add video to enhance their music performances. Music videos are now part of the portable music scene since most smartphones support streaming video along with streaming music.

While the iPhone and smartphones, in general, are the current portable music player for most people, I believe that the next big evolutionary leap in delivering digital music will come in two important steps.

The first will be to deliver the actual music player in headphones and earbuds themselves. Today, people use Bluetooth radios to deliver music from a smartphone to headsets or earbuds. But I have recently seen some work in the labs around building the entire streaming wireless music delivery system into these headsets and earbuds as well. This would eliminate the need to carry a smartphone to get that music and only have to have the headset or earbuds.

We actually have had headsets with AM and FM radios in them for over three decades. And some headphones today can host an SD card with recorded music too. For example, Sony and others even have headphones with an MP3 player in them that has 4GB of storage, and you can download recorded music for mobile playback.

One can even deliver stored music via a smartwatch to wireless earbuds as Apple allows with the Apple Watch and the iPhone. But the idea of creating a smart earbud or headset with a cellular chip that can access streaming music and audiobooks on demand is an interesting next step in portable music delivery.

The second step will be to integrate music videos into the portable music experience beyond what you can get via a smartphone. That will come via AR and VR glasses or goggles.

If you have seen Apple’s AR examples of how a person could be inserted into a game, you get the idea of what is around the corner with music concerts and videos. The work that is going on with VR and AR could eventually allow a person to be virtually transported into a music performance to be able to be in the mosh pit at a concert or to dance with folks watching a band perform.

AR headsets could also enhance live music concerts. Imagine wearing a set of AR glasses at a concert and seeing the lyrics in front of you as the band performs. Or you could ask via the headset for information on the band performing as well as historical information about a song they may have on their setlist.

Videos and Live Performances
Not surprisingly, a large number of VR and AR startups are attempting to gain traction in the live music industry. Although I can’t touch on all of them in a single article, here’s a selection of the companies jumping into the video and live performance spheres.

Within has entered into a deal with Universal Music Group to develop VR and AR experiences for some of the artists on its roster. The Chemical Brothers and St Vincent were the first from UMG to work with Within, developing a creative and interactive music experience called Under Neon Lights.

MelodyVR is a London-based company focused on its goal of offering live streaming of concerts in Virtual Reality. Although its full vision has yet to come to fruition, the company has worked with more than 650 international artists, including Post Malone, Blake Shelton, The Who, Kiss, and The Chainsmokers to develop innovative uses of VR in a live music setting, with the hope that VR technology will soon be widely adopted by consumers.
Facebook, in conjunction with Oculus Go and Gear VR, launched Oculus Venues live events last year with an initial Vance Joy concert. Oculus Go is a relatively affordable VR headset at $199 in the U.S. and offers the convenience of not being tethered to a computer. Although it’s early in the game, the potential for this offering to gain significant traction among concert-goers is an exciting move in the direction of the mass adoption of VR and AR in the world of music.

I believe that the integration of a VR and AR experience through smart glasses and smart goggles is not only where we are headed but has the potential of creating a whole set of new experiences that makes music more personal and interactive. This appears to be the next big portable music platform, and it should be fun to watch it develop over the next few years.