This article was originally published for subscribers of the Tech.pinions Think.tank. To learn more, or sign up for your daily dose of tech industry insight, click here.

Last month, in collaboration with Aaron Suplizio from Experian, we conducted a study on iPhone X owners. Most of the respondents in our survey were from the US, but we did have pockets of respondents from many parts of Europe. Our study intentionally focused on the early adopter part of the market due to this cohort being one of the larger majority groups of iPhone X owners. We knew focusing on this cohort would yield the highest volume of owners and we were right. That being said, we did capture enough non-early adopters to generate some insights on mainstream views of iPhone X, but for this article, I will focus on early adopters.

Customer Satisfaction
It’s tempting to believe that just because results of a study lean heavily on one particular profile that the results are so skewed, you can’t use them. This thinking would be entirely false. For many years I’ve been extensively studying every type of consumer profile, and the real insights come when you examine these different groups separately under a microscope. There is some value looking at the topline representative results of a study, but there is more value in breaking those results up into consumer profiles and see what different types of consumers have to say on the subject you are studying. Very few people in research know and understand this nuanced point.

On Apple’s last earnings call, Tim Cook reported a 99% customer satisfaction number for iPhone X. An observant person may have caught this and wondered why we have different numbers. There are some possible answers like different panel makeups, but I think the big one is we have a significantly higher number of iPhone X owners in our study than 451 Research did in theirs. The higher number of responses led to a slightly more balanced number, but with a +/- of 2% from either survey I’m confident the number holds up.

Where things got interesting in our survey was when we looked at customer satisfaction of iPhone X by specific features. I have created the following chart to help with the visual. 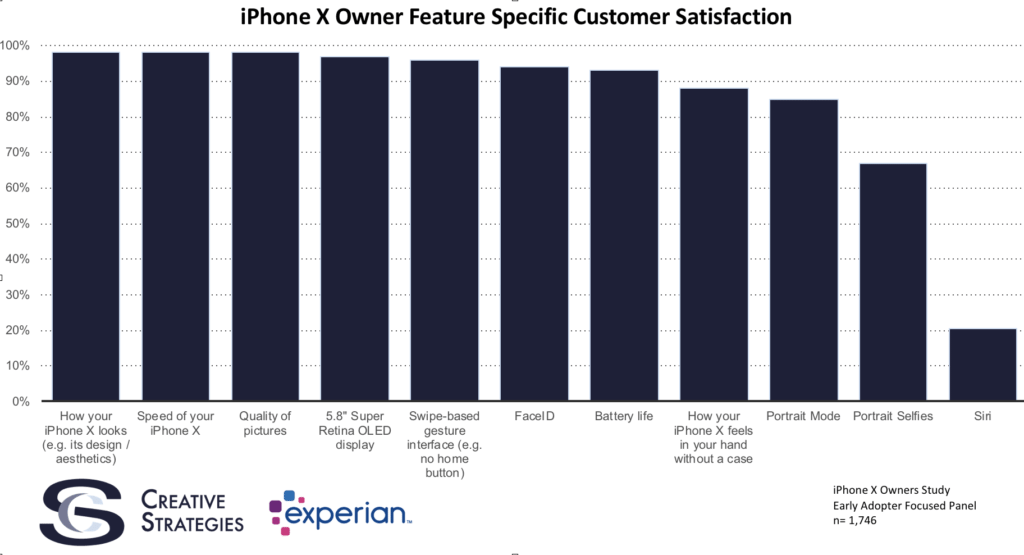 Looking across the board at satisfaction for the main features of iPhone X, it appears Apple has nailed the benchmark features. It was encouraging to see the two major behavior changing features of iPhone X in the new home button-less UI, and FaceID itself ranked an over 90% customer satisfaction. Toward the latter end of the curve were both portrait photos and portrait selfies (*note some of the new features like portait lighting is in beta). Both areas where it seems Apple still has some headroom to improve but still ranked a solid satisfaction number. Then there was Siri.

I can do a whole post on early adopters opinions of Siri, but since it’s on the chart, I just want to make a few points. Firstly, you may think it’s odd for us to include Siri in this since it’s not a feature unique to iPhone X. While this is true, we included it since it is designed to be a core feature of the iPhone but also for the unique optimizations with on-device performance and machine learning that exist with Siri on iPhone X due to the new processor design. The main point, however, is a reflection of an insight I mentioned earlier that early adopters are more critical than mainstream consumers of technology. This is reflected in this chart but also highlights something important. Just because a demographic may be early tech leading, or even fanatical about Apple, Siri ranking low with this cohort shows that they are also quite pragmatic and ready to criticize when necessary.

Overall, the data we collected around iPhone X show that if Apple is truly using this product as the baseline for innovation for the next decade, then they are off to a strong start and have built a solid foundation. The big exception still being Siri, but I’m optimistic Apple is making changes to the priorities around Siri and am hopeful we will see progress here in the next few years. If Apple can bring Siri back to a leadership position and in combination continue to build on the hardware and software around iPhone X base foundation, then they will remain well positioned for the next decade.