Though the emphasis on chip technology discussion often centers around the likes of Intel, AMD, NVIDIA, and Qualcomm, one of the biggest players is contract foundry TSMC. Taiwan Semiconductor Manufacturing Company represents more than 50% of the fabless semiconductor production in the world, building for those same companies listed above, including Intel for select projects like modems.

There is competition in the field, mostly stemming from the likes of Samsung and GlobalFoundries, in terms of leading-edge technology capability. Samsung has targeted TSMC’s market share as an area for its own growth with dramatic investments in R&D and production capability. GlobalFoundries is smaller, but spunky, pushing ahead with new tech like EUV, hoping to become a “fast follower” to the Taiwanese giants. Even Intel has talked about opening its fabs to external production, but the impact there has be minimal thus far.

Despite the pressure from other companies, TSMC continues to be the leader in both revenue and, debatably, roadmaps. Last week during an analyst call the company announced it had started high volume production of 7nm FinFET silicon, with 18 different products taped out from its customers. A tape-out is the term for the final chip validation that enables volume production to begin. TSMC expects to have 50 total 7nm tape-outs by the end of 2018. 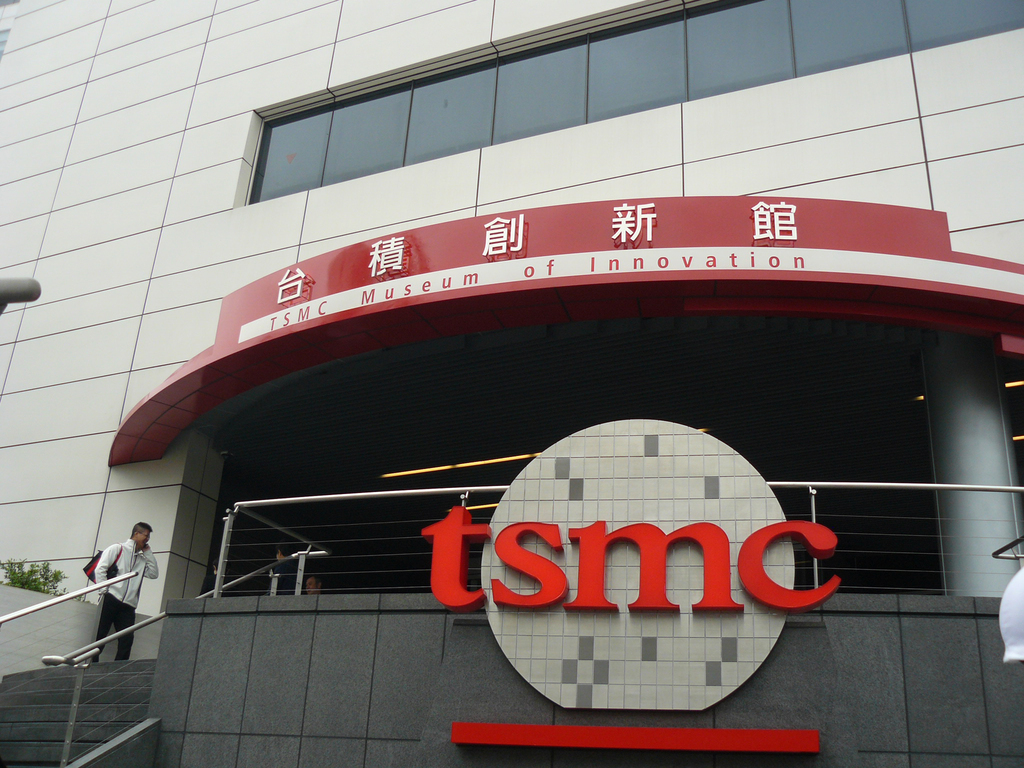 7nm is of particular interest to the semiconductor industry as it will bring wide adoption from a host of different applications. For years, 16nm FinFET technology has been the stalwart of TSMC’s portfolio and is where the bulk of high performance chips like graphics and CPUs have remained. This is despite the fact that 10nm process technology has existed since late 2016. 10nm has only been utilized by a few key partners including Qualcomm and Apple, targeting more on power efficiency than raw performance products. Chips that demanded higher performance capability (frequency) stuck with the 16nm node.

But with 7nm that changes. This is where we will find NVIDIA’s next generation graphics chips for gaming, machine learning, and AI. AMD is going to be building its upcoming graphics family with TSMC 7nm (while the next-gen CPU products will stay with GlobalFoundries). TSMC mentioned other 7nm customers that include cryptocurrency ASIC designers, neural processing engines, and even mobile processors from Qualcomm and Apple will find their way to it.

Performance claims for TSMC 7nm FinFET technology are impressive. The company stated on its analyst call that moving from the current 16nm node to 7nm will result in a 70% die shrink, saving customers dramatically on the area per chip for each wafer. As cost is based on a per-wafer model, this is a big advantage for vendors like Qualcomm that are building small chips and allows someone like NVIDIA to design a more powerful GPU in the same area. 7nm will also provide either a 60% power consumption drop at the same frequency levels or a 30% improvement in frequency at the same power level, allowing engineers to decide between these traits on a per-use basis.

For TSMC itself, the potential timing and technology lead it appears to have with 7nm FinFET comes at a perfect time. With the market for new smartphone chips softening based on many reports, the demand for the 10nm process will be following the same trend. With 7nm, TSMC will be able to balance and manipulate customer demand between mobile vendors, graphics vendors, AI vendors, etc. As the shift in silicon demand moves, TSMC will potentially have the answer for all of them.

The first generation of TSMC’s 7nm process technology is using existing manufacturing hardware, though it does require additional production steps called patterning. So, while this lowers the barrier of entry and Capex requirements for TSMC, it does mean that each wafer takes more physical time in machines, increasing demand and decreasing throughput (without production capability investments). This means there will be a cost increase, though TSMC and its partners haven’t talked specifics. For flagship products like GPUs and cryptocurrency miners this won’t be a problem as the cost can be absorbed or prices can be increased to compensate. For less expensive processors like budget-market cell phone chips, it could be concerning.

The net result of this 2018-2019 ramping of 7nm process technology is that hardware is about to get interesting once again. The stagnant areas of graphics and high performance mobile devices will likely see big changes in 2019 as utilization of TSMC (and Samsung and GlobalFoundries) new 7nm tech ramps. It also means that nascent areas of AI processing engines, machine learning chips, even crypto/blockchain processors will have the room to grow and expand in capability in a way we have yet to witness.