Turning Microsoft’s Archipelago Into A Continent

The Verge and other publications reported this week on a talk given by Microsoft’s CMO, Chris Capossela, at the Convergence conference. One of the most interesting parts of the talk he gave was this chart he shared: 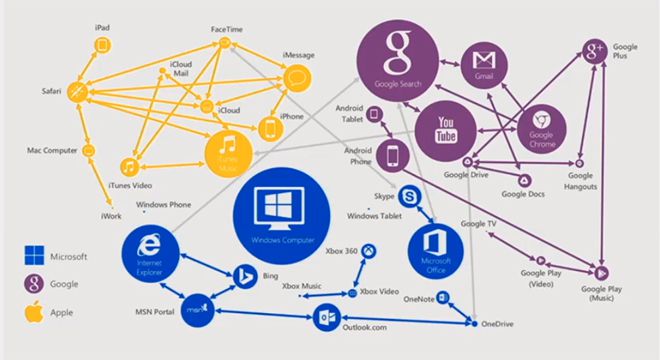 Some definitions to start

It’s important to understand what the chart represents, so I’m going to quote the official transcript for the explanation:

The size of a circle is how many consumers use the product in the U.S. in a short period of time that we measured it.

The arrows that connect the circle tell you that if you use product A, you’re statistically more likely to also use product B than the rest of the population that does not use product A.

The concept is simple, but it’s important to get that grounding before we continue. The key point is the lines don’t represent theoretical or technical linkages, but linkages in people’s actual behavior between these services.

So what patterns does the chart show? First, as regards to usage of the various properties:

But this chart is really about linkages

Now, as regards to the linkages between them, which is the real point of the chart (and this article):

As Capossela summarized it:

Google’s linkages are in single ID, the homepage and Android

All this raises the question of what those linkages between products are at Google and Apple and why Microsoft doesn’t have the same level of connectivity. I’d argue the strongest links at Google are the Google homepage, with its list of links and the nine–square grid in the top right corner (see below); the single user identity it consolidated around in 2012 across all its properties; and thirdly, Android. Here’s that homepage corner I’m talking about (there are two separate screenshots here, with the second what you see when you click “More” in the first): Right here, explicitly connected on the homepage of Google search (the biggest purple bubble in the chart) is Google’s linkage between its various properties. But on top of that, your single identity allows you to hop between these properties while remaining signed in and therefore quickly accessing the data, content, or settings within each of those properties.

Lastly, Android brings all these services together as apps on the mobile operating system with by far the largest market share worldwide. Google, therefore, has these three strong existing ties between its various properties and I’d argue they’re building yet another layer on top of that with Google Now, which pulls in data from various other properties and brings them together in a single interface which proactively surfaces things that are relevant at any given moment.

Apple’s linkages are also in single ID and OS, but also iCloud

The linkage on Apple is a combination of the Apple ID and its two major operating systems, iOS and OS X. Apple’s key services are both tightly integrated into its operating systems and, increasingly, take advantage of the Apple ID for integration across devices and platforms. It’s no coincidence that, even though iCloud is a relatively small bubble, it’s at the center of Apple’s ecosystem here, as it’s increasingly the connective tissue that pulls many of these services together. Apple has always focused on tight integration between hardware and software, but it’s the integration between these two and various iCloud-backed services that’s become increasingly important in recent years.

Where are Microsoft’s linkages?

So what, if any, are the linkages in Microsoft’s archipelago of products and services? Unlike both Apple and Google, Microsoft hasn’t until recently had a single ID system that operated across all its properties. Skype had its own, Office really didn’t have any kind of connected identity associated with it until Office 365 came along, Hotmail and other online properties had disparate identity systems and properties such as Bing also didn’t require any sort of login to be valuable.

Over the last couple of years, Microsoft has begun to consolidate around a single ID system with its Live IDs, and Skype now participates in that same system too. But the benefits to using such a single ID across various Microsoft products have been fairly limited. The one really big potential integration point has arguably been Windows, which appears as a bubble on Microsoft’s chart but isn’t connected to anything else. I’m guessing because it doesn’t count as a service in the same way as the others. But the PC itself has also not really fulfilled this potential in the past, with various individual applications and services running on the PC not really sharing any connectivity between a shared file system. As such, despite both Google’s and Apple’s success in utilizing both identity and operating systems as unifying elements, Microsoft has largely failed on both counts. The new Live ID system and both Windows 8 and Windows 10 promise to do better on these elements, but I still doubt that, by themselves, they’ll drive real connectedness, especially since Microsoft is largely missing the mobile piece.

The potential role of Cortana

One thing I think could become really interesting for Microsoft here is Cortana and the speech makes reference to Cortana briefly, though only as one of several possibilities for driving greater interconnectivity. Now, I’ve made the mistake along with others of thinking of Cortana much as I think of Siri – as a speech assistant on a mobile platform. It is that, to be sure, but what Microsoft really means by Cortana is not just the software on the phone but all the cloud services that sit behind it, including both the global data gathering that happens through Bing and the user-level data crunching that builds a profile of a specific individual. This is what allows Cortana to exist, not only as a feature of Windows Phone, but as a deeply-integrated feature in Windows 10 and as part of Bing online as well. In this sense, it’s much more like Google Now than Siri, in that it’s a cloud platform that can both suck in data from various sources and feed it back on various endpoints in an integrated fashion.

The reports about Cortana making its way onto iOS and Android make a lot more sense in this context, since Microsoft doesn’t enjoy significant share in mobile as it does in the PC market, and tying together your mobile world on iOS or Android with your PC experience requires something like Cortana to pull all the pieces together. Although I’d expect a Windows Phone-like instantiation of Cortana in an app on those other platforms, I’d also expect Cortana to play an increasingly important role in the background of various other Microsoft apps, pulling in data from them that helps improve Cortana’s performance as a virtual assistant wherever you use it. In this way, Microsoft might finally start to build a set of connected services that actually work better together rather than working independently as they do today.

Microsoft’s success in consumer depends on building these links

Chris Capossela doesn’t actually elaborate much on how Microsoft will build these links in his talk, beyond a couple of small examples. But I believe that creating these linkages between consumer properties will be critical to the success of Microsoft as a consumer brand. I wrote about this a bit in my piece on Microsoft’s recent acquisitions in the personal information management space, but it goes further than that. Microsoft won’t be broadly successful as a consumer brand if it only has a handful of popular but disconnected products and services. It will only be broadly successful if it’s able to built an interconnected ecosystem of products and services which are better because they work together in ways that benefit users more than if they piece together their own patchwork of equivalents from various different providers. To extend the analogy I used earlier, Microsoft needs to replace its archipelago with a continent.