The TV industry is constantly going through change. Focusing just on the last twenty years or so, we’ve seen several waves of disruption:

One of the consistent themes in almost all of this disruption has been a two-fold shift:

In this piece, I’m going to focus on the first of these shifts but I’ll touch on the second briefly at the end and likely come back to it in a future post.

A permanent shift or just a detour?

The big question in my mind has always been to what extent these trends were inevitable and inexorable and to what extent they represented a temporary detour from past patterns to which users would return to in time. I’ve always favored the latter explanation myself and we recently got some interesting insight from Hulu on this point. Hulu’s Peter Naylor did a blog post about viewing habits. He shared some statistics about how and where people consume Hulu – note that what is labeled OTT in this chart Hulu calls “living room viewing” in its description: 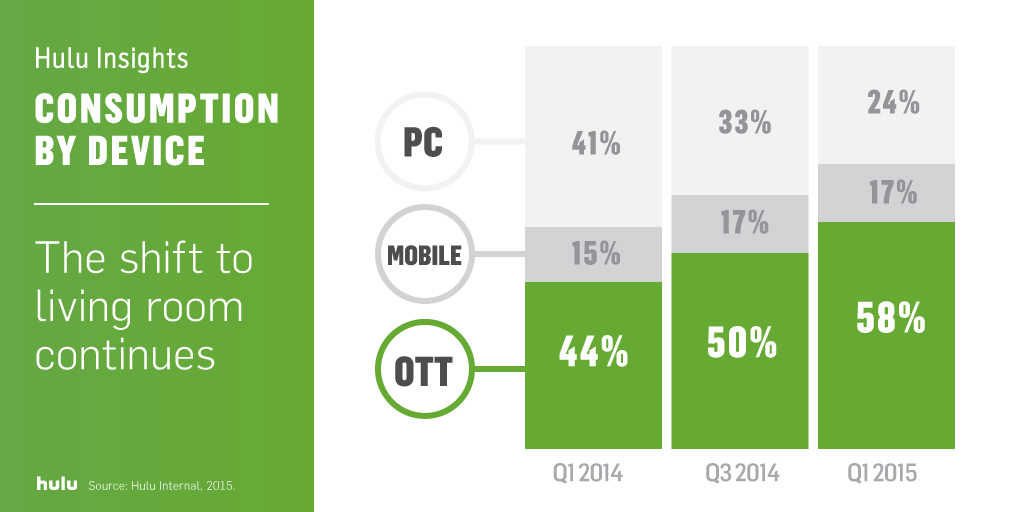 As with many of the other disruptions outlined above, the primary vehicle for viewing video with Hulu was at first the PC. But even as early as Q1 2014, Hulu saw living room viewing overtake PC viewing and it’s now by far the dominant method of watching Hulu. All this is important, because what it suggests is people didn’t view video content on their PCs as a matter of device preference, but as a matter of availability and convenience – they knew how to watch Hulu (or Netflix or YouTube) on their PC, but didn’t have a way to do so (or couldn’t figure out how to) on their television. As such, what has appeared to be a shift away from the television over the last several years may have been – at least in some cases – a temporary phenomenon, which will fade over time as the adoption of smart TVs, connected Blu-Ray players, boxes like Roku, Apple TV, and Fire TV increase, making TV-based consumption even easier than PC-based consumption.

Mobile in the minority

Of course, the other piece that’s growing, which usually gets far more attention, is mobile. But it’s grown from 15% to 17% over the same period that what Hulu calls “OTT” grew from 44% to 58%. Mobile is important, but the vast majority of Hulu viewing (and of TV viewing in general) is happening in the living room, not while truly mobile. One caveat: Hulu’s “OTT” category appears to include something it calls “connected devices”, which might include tablets. Why would someone use a tablet in their living room rather than the TV? I see a couple of possible reasons: convenience (it’s still easier to just watch using a connected tablet than figure out how to do it on my TV), and solitary viewing. It’s the combination of that latter trend – viewing TV alone rather than in couples or larger groups – combined with truly mobile viewing that’s going to stick, at least to some extent. But the evidence from Hulu and other data suggests it’s small in comparison to the majority of people who still prefer to watch TV programming on the largest screen in the house. What you end up with then is this picture: The other shift looks equally vulnerable

The other shift I mentioned was the shift away from traditional providers of paid television services. So far, the rise of Netflix in particular and, to a lesser extent, Amazon, Hulu, and others suggests we are indeed seeing this shift continue. However, we’ve also seen the major pay television providers respond to almost all of the disruptions by these new players over the last several years, though imperfectly in some cases. I’m not going to focus on this shift here but, suffice to say, I suspect the pay TV providers will hold up (and hold share) much better than a lot of people are assuming. The disruption we’ve seen in the industry has moved at a relatively slow pace and that’s given these players time to adjust their models and find ways to respond to almost all the major changes occurring around them, with one exception. But that’s a topic for a future post.