What are the Tech Booms of this new decade?

I have been doing a series for Forbes entitled “Looking Back and Looking Forward.” It is a series that takes a look at some companies I cover and, I review their accomplishments and failures over the last decade. I also speak to their CEO’s and ask them to share their vision and objectives for their company in the next decade.

To date, I have covered Dell and AMD and plan to do five more pieces in this series over the next few months.

The end of a decade is always good for looking back, but at this turn of the decade, I was most interested in what we could expect in tech over the next ten years.

The CEO’s I have interviewed so far gave me glimpses of the way they plan to lead their companies over the next ten years and listed many different areas of technology they will invest in and innovate around in their near and extended decade future.

But if you step back from these companies’ parochial view of what they plan to bet on in the way of technology, one should also look at the big picture in terms of the tech booms that will guide much of the technology advancements in the next decade.

During my research on Dell and AMD for this Forbes series, I ran across a chart from Statista that culled data from IDC, BloombergNEF, Ericsson and Strategy Analytics and laid out four major areas of tech that could see explosive growth and adoption over the next 10 years.

The first one they detail was the market potential for AI. They predict that by 2023 it will bring in $98.4 billion with a CAGR of 28%. Although this projection only covers up through 2023, all of the research I have seen across the board indicate that AI and related technologies will see tremendous growth in the next decade.

The second one they state will deliver another tech boom in the next decade is Electric Cars. It will grow from 10 million electric vehicles sold in 2025 to 28 million sold annually in 2030. I consider this number conservative at best. By 2025, every car manufacturer will have at least two models of Electric cars in their lineup and in talking to two big automakers about their long term electronic vehicle strategy, I know they are aiming at much higher numbers by the end of the decade.

The third area they cover was Smartphones and especially 5G phones in use over the next five years. They project that in 2020, only 1.1 % will have a 5 G subscription. That rises to 30.1% in 2025. If you are a wireless carrier, 30.1% in 2025 should scare you. They plan to ramp up 5G coverage around the world relatively fast and in talking with two big carriers, they have told me that they would like to see more than 30% of the smartphones around the world connected to a 5G network by 2025. 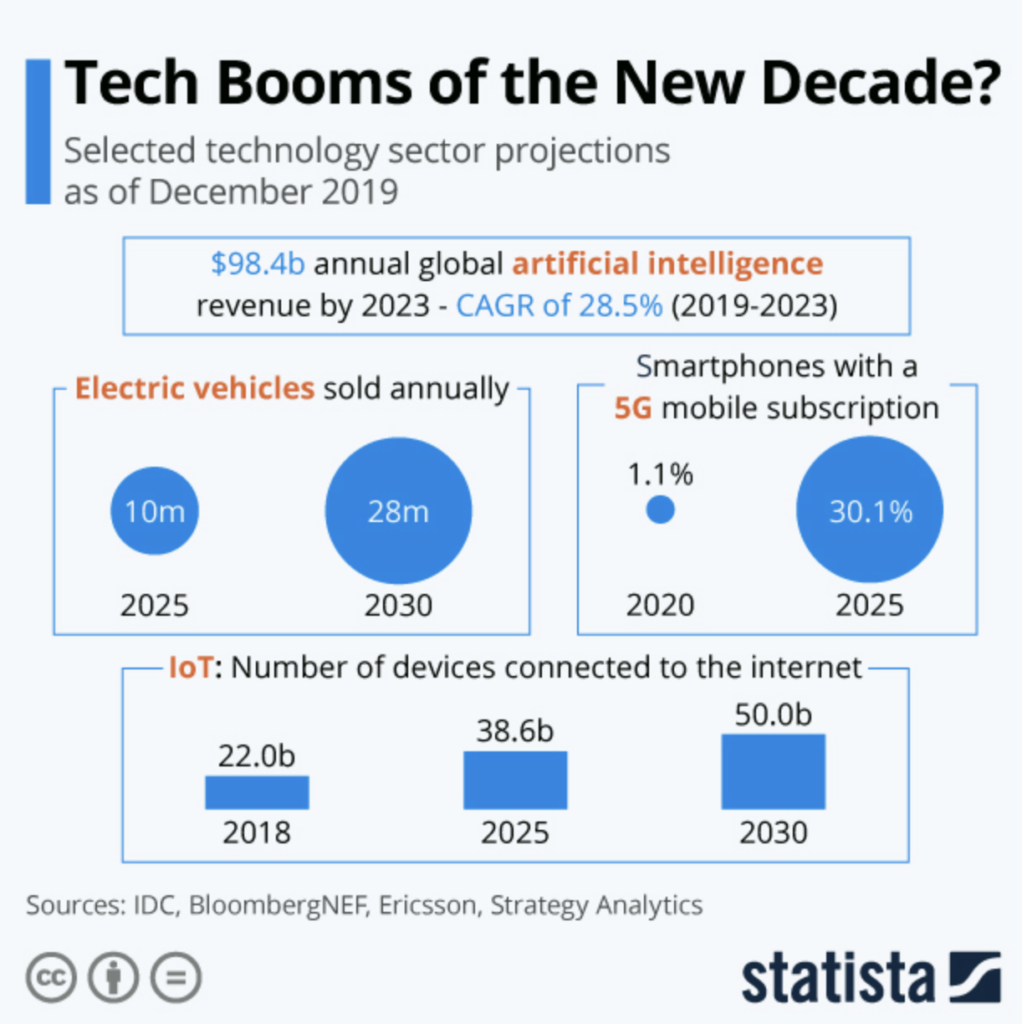 I don’t know what types of devices they believe will be in this connected IOT forecast, and it may be an issue of how they define devices that make this number so low. But Internet-connected IoT devices could span everything from smartphones, smart speakers, smart TV’s, etc to smart street lights, smart locks, smart buildings and connected devices within its infrastructure, to smart toilets, smart medical devices, smart manufacturing, and most likely, millions of other IoT products that could benefit from an Internet connection.

I do believe these four areas, AI, electric cars, 5G smartphones, and connected IoT are sure bets for being tech booms from now until 2030. What is harder to predict is the impact of current and future social networks and things like cryptocurrency, the cost to battle fake news, deep fakes and election tampering, and security issues and breaches that I am also sure will be a big part of what the tech market will encounter and have to deal with in this new decade too.

Although I am bullish on the role tech can play and, the market booms that will come from innovation in technology in the next decade, I am equally petrified of the types of security issues and negative things that technology could be a part of over the next two years

The tech sector could be in for a wild ride in these next ten years as we double down on these major “boom” areas and at the same time, having to thwart the kinds of things we will encounter from the darks side of tech too.