We are exactly a week away from the Apple September event which calls us to gather together in Cupertino to see what is to expected to be the next iPhone generation.

As we get closer to the event rumors and leaks multiply. A consistent expectation seems to be that Apple will remove the home button, also known as Touch ID from across the new iPhone models. There has been quite a bit of a debate on whether or not Apple would be wise to do so, as people love Touch ID and there are concerns about the learning curve of the new UI centered around Face ID.

I was a big fan of Touch ID and I must admit there was some trepidation on my part when the change was announced. At the end of the day when things work, accepting change is a little harder than when change comes to replace something you hated.  I can tell you that having used an iPhone X as my main smartphone since its launch I have not regretted the move from Touch ID to Face ID. Except for a few occasions when due to poor light conditions or my inability to open my eyes properly, mostly first thing in the morning, Face ID just works. From picking up to swiping up, all is one fluid movement that makes you feel like your phone was not even locked.

Given, a sample of one does not make for good research we, at Creative Strategies, had reached out, back in March 2018, to 955 consumers in the US, 680 of which were iPhone X owners. 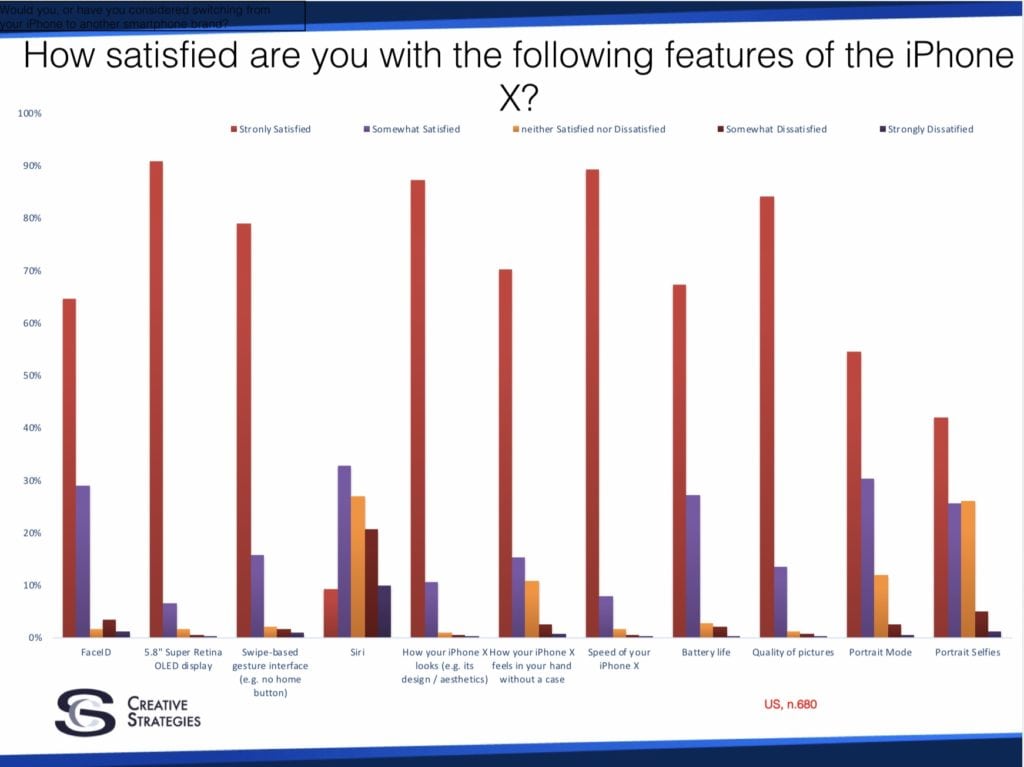 When looking at the features individually, 79% of the sample was very satisfied with the Swipe-based gesture UI and 65% was very satisfied with Face ID. The ambivalence on Siri comes across clearly when looking at how the sample was distributed: 33% was somewhat satisfied, 27% was neither satisfied nor dissatisfied and another 21% was somewhat dissatisfied. While this is not great for Apple it is not all bad news either. Users clearly don’t see Siri as a purchase driver or positive differentiator, but they also do not see it as detrimental to their overall experience.

Satisfaction is a very good indicator, but we really wanted to get to how users felt about some of the changes implemented on the iPhone X, so we asked if they agreed or disagreed with some very specific statements. 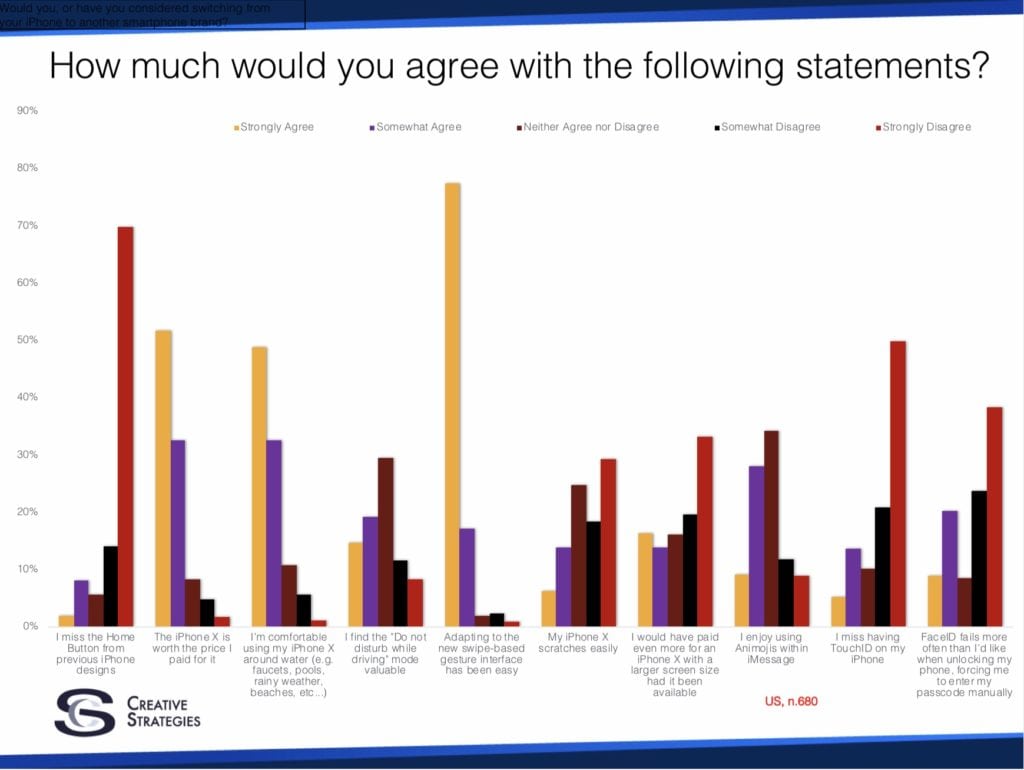 70% of the panel strongly disagrees that they “miss the home button from previous iPhone models”. Another 14% said they somewhat disagree.

Because some people think differently about the Home Button and Touch ID we wanted to make sure we asked about both. Some users think of Touch ID as an enabler for Apple Pay and authentication across the board, while they think of the Home Button as the “control center” to navigate the iPhone. We asked whether they agreed or disagree with the statement “ I miss having Touch ID on my iPhone”. Here while the overall sentiment remains positive it was a little more muted with 50% saying they strongly disagreed and 21% saying they somewhat disagree.

When asked if “adapting to the new swipe-based gesture interface has been easy” 78% strongly agreed with the statement and another 17% somewhat agreed. While this panel was skewed towards early adopters the results ,bode well for a more mainstream userbase as it would be safe to assume that the learning curve of the new UI would be moderate at worst for them.

Another highly debated point when it comes to iPhone X has been the price. Apple’s last two earnings calls have made it clear that price has not been a hindering factor in adoption, as the iPhone X has been the most sold model for two quarters in a row. I have been arguing for a while that users are prepared to pay for something that gives them a high-return and considering the time users spend on smartphones and the wide range of tasks they perform the investment is certainly worthwhile. When we asked whether or not our panel of iPhone X users agreed with the statement “The iPhone X is worth the price I paid for it” 52% said they strongly agreed and another 33% said they somewhat agreed. Being expensive and being worth the price are not mutually exclusive and I think the attention is usually only on the cost rather than the return on the investment.

But the question has now really moved to “how much higher can Apple go?” and with the rumors of a bigger iPhone X-like iPhone model chances are that the screen will not be the only thing being bigger. When we asked our panel of iPhone X users about paying more for an iPhone X with a larger screen the intention might not help us predict the future as much as we would want. When asked if they agreed with the statement “I would have paid even more for an iPhone X with a larger screen size had it been available” only 5% strongly agreed and another 14% said they somewhat agree. The main reason why I am saying that this data point might be somewhat inconclusive is that the reasons why users would have not agreed with the statement might have had more to do with their satisfaction with the current screen size, which as we saw was extremely high, than with their willingness to pay more. In other words, they do not put a higher value on a larger screen.

Overall this dataset shows the opportunity that the new iPhone models will have is big and that the overall combined portfolio Apple will have by the end of the September 12 event will be the strongest yet.