A Twist on Foldable Smartphones

Last May, I attended the SID conference in L.A. This is the premier display conference in the world. At this show, I saw the first foldable displays that could be used in a smartphone and unfolded to become a small tablet. I wrote about it and laid out how companies like BOE, Visionex, and Samsung showed prototypes of this foldable form factor and how it could drive a new type of design in smartphones in the future.

Since then, Samsung has introduced its first foldable smartphone known as the Galaxy fold, and they will start to take orders for this device this week.

When I saw the BOE prototype at last years SID conference, I got to hold it and play with its screen and fold it at least five times. The good news is that true to form, when folded out it becomes a small tablet. But in the folded mode it was not a great smartphone, and it did not fit in my pocket well.

While this form factor has become the standard view of how foldable are seen at the moment, I think the jury is still out whether a foldable phone that becomes a small tablet has a future. I would argue if there is even a solid business case for a dual-purpose smartphone.

I have seen a lot of speculation that this form factor could be successful but no serious research that even hints to whether a foldable smartphone that doubles as a small tablet is even what people want.
But the first reviews of the Samsung Fold are just coming out, and the initial response to it is relatively favorable.

Here are a few of the early review comments-

“It’s going to take more time to understand whether the Fold is the future or just a Frankenphone. A smartphone and tablet in one could be convenient … or do both jobs less well. I suspect it has more potential as a replacement for a tablet than as a phone. To find out, I would need to operate the Fold one-handed on my morning commute, try to burn through emails at a coffee shop, and catch up on my Netflix queue on a flight.

Samsung still has a lot to figure out on this. Perhaps that’s why it’s focusing on a high-end — and more-forgiving — market for its first folding phone.

Design critics have said the Fold suffers from the problem of combining desires that sound reasonable together but end up ruining each other — like the Homer Simpson Car on a beloved episode of “The Simpsons.”

To me, the Fold’s usefulness as a one-handed phone seemed to take a back seat to its capabilities as a two-handed tablet. The question is: How many people need an Android tablet with them at all times? Samsung was right years ago about the trend toward larger-screen phones, which not that long ago we used to jokingly call “phablets.” The Fold combats the distressing trend of people needing handles, like those stick-on circular PopSockets, just to firmly grip their phones. If it catches on, the Fold could be the beginning of an era where big phones really are just tablets.

Perhaps the lesson from the first folding phone will be about the value of making devices smaller. Instead of doing origami on a tablet, imagine folding in half the phone you already own. “I don’t just want bigger screens, and I want being smart with the screens you have,” Milanesi said. Welcome back, flip phones.”

“If folding-screen smartphones do take off, the Galaxy Fold will have its place in history. But will it be remembered as the category’s iPhone—an epoch-defining device that everyone else chases for a decade or more? Or its Palm Treo—a much shorter-term phenomenon? Or could it be IBM and BellSouth’s Simon—the 1994 device that kicked off the smartphone era without succeeding or even influencing anything that followed? We might not know until years have passed and additional iterations of the Fold have come and gone.

For now, even Samsung can’t say where this device will lead it and the smartphone industry. The company seems to be OK with that. CEO Koh told me that he’s optimistic about the prospects for devices like the Galaxy Fold going mainstream. But first, he says, “I want to see the response from the market.” So does everybody else.”

Their price point of $1900 to $2900 at first will be a deterrent from this being a big hit. But even if a couple of thousand buy them and give feedback on their likes and dislikes, we could get a read on its short and long term potential. 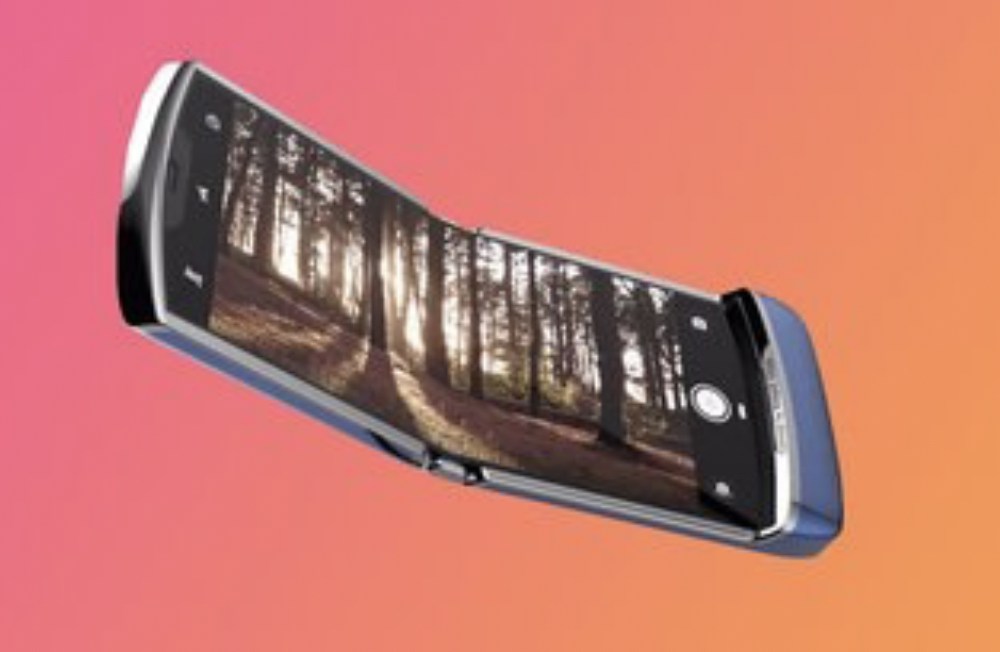 And recently, Sharp developed an OLED foldable screen optimized for smartphones that can be folded in half. In fact, they even created their own prototype foldable phone to show off their new screen.
https://www.oled-info.com/sharp-demonstrates-618-foldable-amoled-prototype

I have no doubt that the next phase in smartphone innovation will be to integrate some type of folding screen into their designs. While we will get better cameras, more memory, sharpers screens, etc., the current form factor is due for some major changes in form and design.

Indeed, my colleague at Creative Strategies, Carolina Milanesi @caro_milanesi had an important take on the Samsung Galaxy Fold.

“Comparing the #GalaxyFold to a traditional smartphone would miss the point. This is not just a flagship product, and this is the first of a new category which is not for every buyer out there & not just because of price. Status, fashion & tech all come together in the target buyer.”

However, at this stage, I think that the Samsung Fold and others that want to be a smartphone and tablet may not be the form factor that drives the highest demand in folding smartphones. I do believe this design will have some serious interest from users and could do well over time, especially if prices can get under $1000. On the other hand, a smartphone that could deliver perhaps a full 7.3-inch screen when unfolded from the top down, maybe the design that gets the broader attention in a folded smartphone market of the future.