One of the biggest misconceptions about cloud computing is that companies pick a single cloud computing platform and then stick with it for all their cloud computing efforts. As new research from TECHnalysis Research points out, today’s businesses are using a multiplicity of cloud providers and cloud types, and are putting different workloads in different places, often for different reasons.

In last week’s column (see “New Research Shows It’s a Hybrid and Multi-Cloud World”), I described the overall purpose and approach for the new Hybrid and Multi-Cloud Study. Also mentioned was the overall diversity of cloud computing efforts, including the fact that companies are using an average of 3.1 different public cloud providers across IaaS (Infrastructure as a Service) and PaaS (Platform as a Service) applications, and that usage of private and hybrid cloud environments is very strong. This week, I’ll dive a bit deeper into the types of workloads organizations are running in the cloud, where they’re running them, and why.

First, it’s interesting to get a perspective on what types of applications companies have moved to the cloud. As Fig. 1 illustrates, there is a wide variety of different applications that are being run in the cloud, most of which are being used by more than half of all the survey respondents. (Note that Figure 1 provides an overall view of cloud-based workloads across public, private, and hybrid clouds.) 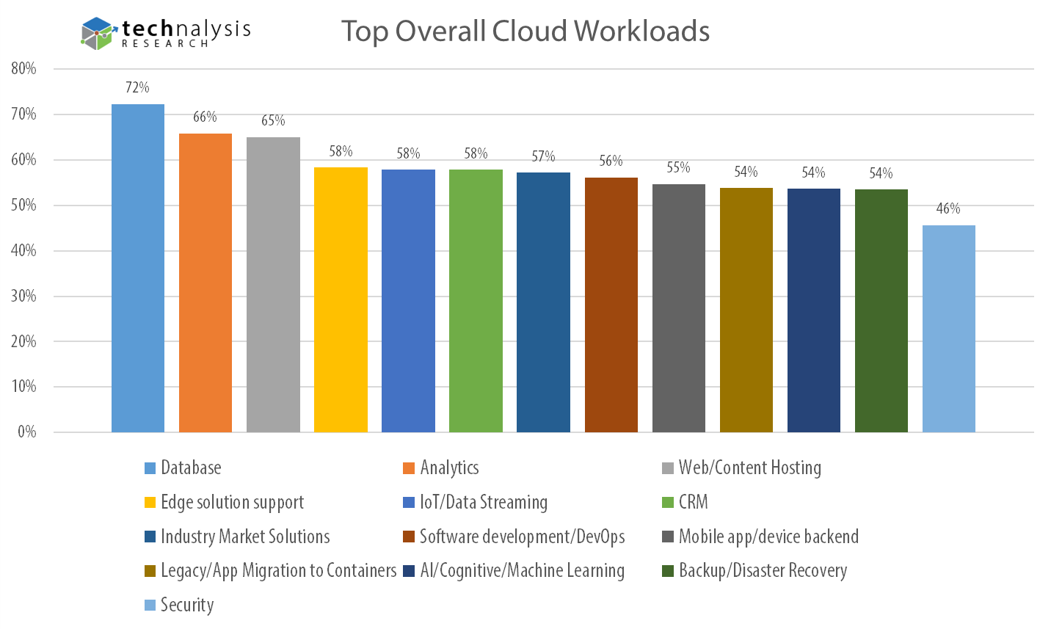 Not surprisingly, Databases are the most common workloads being used overall, and they also happen to be the top choice within public, private, and hybrid cloud installations individually. Of course, the types of Databases and their specific function can vary quite a bit, but it’s clear that businesses have become very comfortable running them in cloud environments. Analytics-based workloads were the second most popular overall, followed closely by Web or Content Hosting. While details can vary by company, many of the Analytics-focused workloads are likely new variations on Big Data efforts that have been at the core of enterprise computing for most of the last decade. Web/Content Hosting is, of course, ideally suited to a cloud-based environment and likely one of the first that many organizations chose to move to the cloud.

Interestingly, when you break down the workload types by just Public Cloud platforms, the order of the two are reversed, with Web/Content Hosting being second and Analytics-focused efforts being third, emphasizing the importance that web hosting plays in the Public Cloud. The story is much different when you break down the top workloads for Private/Hybrid Cloud environments, however. There vertical-specific Industry Market Solutions are second after Databases, followed by workloads focused on Legacy/App Migration to Containers. Both make perfect sense for the types of applications that businesses want to keep a bit more private as well as allow their internal development teams to create new company-specific software solutions.

The diversity in cloud computing choices extends to specific Public Cloud Computing providers as well. It turns out companies are selecting different providers for different workloads, as the data in Table 1 illustrates. Specifically, it lists the top 5 workloads that survey respondents said they were running at each of the top 3 public cloud platforms: Microsoft’s Azure, Amazon’s AWS, and Google’s GCP.

As you can see, while there is some degree of commonality, there’s also a surprisingly large amount of differences, with Databases being the only workload that made the top 5 of all three providers. What’s interesting is that the top workloads in each platform reflect a bit of each company’s heritage in the cloud and overall. In Azure, for example, Microsoft’s heritage of database strength with its SQL Server platform clearly has an influence, while the strong tie between many vertical-specific applications (which are incorporated in Industry Market Solutions) and Windows also undoubtedly played a role. As the early leader in cloud computing environments, Amazon is the logical choice for many Web/Contest Hosting platforms, while its early PaaS efforts focused on data analysis capabilities. Finally, given Google’s heritage as an overall cloud innovator that built services based on large databases and is generally credited for developing many of the cloud-native software development tools and processes, the strength of Database and Software Development/DevOps workloads make sense as well.

Cloud-based computing is clearly continuing to take on an increasingly important role for companies of all sizes and, as this research illustrates, the range of cloud types and platforms now being used gives organizations a wealth of choices in determining how to spread out their various workloads. As with virtually anything related to enterprise computing, those choices can quickly become a bit overwhelming. At least now organizations can see that there aren’t necessarily wrong choices when it comes to the cloud, but rather, a host of options that they can consider.

(You can download a free copy, in PDF format, of the highlights of the TECHnalysis Research Hybrid and Multi-Cloud Study here. The full version 123-slide version is available for purchase.)