For years, people touted virtual reality (VR), augmented reality (AR), mixed reality (MR), or the combined XR (extended reality) as one of the big growth opportunities for the tech market. Even now, in spite of some relatively well-known names shutting down and expectations for the market getting radically muted, there are still some holding out hope that AR/VR (or whatever form of alphabet soup you prefer) will be the “next big thing.”

A key part of the expectations for the AR/VR market was that consumers would take to the technology and, specifically, that consumer gaming would be a big hit. New data from TECHnalysis Research suggests otherwise, however, as the challenges for mixed reality gaming look to be much more difficult than many initially thought.

Based on a recently completed online survey of 2,030 gamers (defined for this study as people who said they gamed on either a PC, smartphone, tablet, or other device for at least 2 hours a week) roughly split between the US (1,017) and China (1,013), current AR and VR gaming experiences only appeal to a fraction of the overall market, particularly in the US.

First, gaming survey participants were asked to select the types of devices they own and use for gaming from a list of 17 categories, including different PC form factor and operating systems, different smartphone and gaming console platforms, and others, including AR/VR headsets. Not surprisingly, ownership and usage of AR/VR headsets was quite low in the US even among gamers—in fact, it was the smallest category of ownership at 4.2%. This is, in part, due to the fact that the AR/VR headsets category is a relatively new one compared to the others, but it also reflects the limited interest many US consumers have shown towards these devices.

Thankfully, the story was better in China, where 13% of gaming respondents said they owned a headset of some type. Even there, however, ownership levels were only ahead of Chromebooks, Nintendo gaming consoles (which used to be banned in China), Chrome-based desktops, iMacs, and Macbooks. Still, it’s clear that there’s generally more acceptance and interest in AR and VR in China than there is in the US.

In addition to low ownership, the average time spent gaming on an AR/VR headset as a percentage of overall gaming time in a typical week was less than 1% in the US and only 2.3% in China. Obviously, platforms like Android phones, Windows 10 PCs, iPhones, and others offer a much wider variety of gaming options than AR/VR headsets. As a result, these other devices consume a large percentage of the time people spend gaming. The result is that even among a dedicated gaming crowd, AR/VR gaming simply isn’t attracting the kind of attention and focus that it needs to stand out as a breakthrough application. To be fair, there are many other types of AR/VR applications available that people could be more interested in, but if strong gaming support isn’t there for the category, that could be a significant long-term challenge.

Unfortunately, the story gets a bit worse when you look at the overall experience and outlook that gamers have with AR and VR gaming, particularly in the US. Respondents were asked to describe their level of experience/satisfaction for different subcategories of AR/VR gaming—PC-based VR, smartphone-driven VR, smartphone-driven AR, and gaming-console-powered VR. As Figure 1 illustrates, there’s still a challenge in getting people to try these experiences, with an average of just under 38% of US-based gamer respondents saying that they had yet to try each of these new gaming experiences. 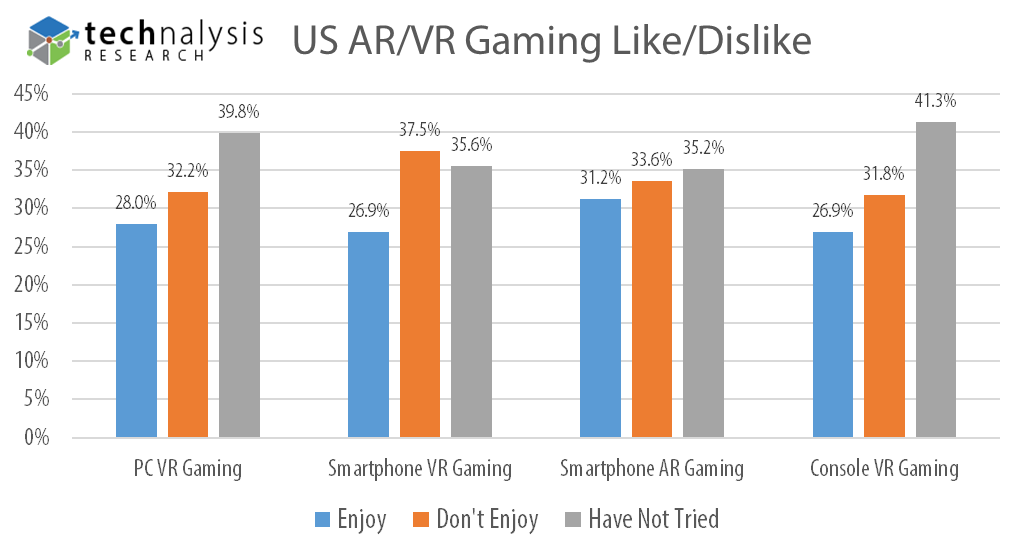 What’s even more surprising (and potentially troublesome), however, is that in every single category, more people who had tried each of the experiences said they didn’t enjoy them than those who did. Specifically, respondents were asked if they owned a device in the subcategory and if they enjoyed the experience or not, or if they had simply tried a device in the subcategory and whether they subsequently liked it or not. The fact that the sum of the dislikes (don’t enjoy) outnumbered the likes (enjoy) clearly suggests that the industry has a long, long way to go to really have a big, positive impact among US gamers. It also highlights the fact that the technology is still very immature and clearly needs to significantly improve before it can start appealing even to a dedicated audience that’s highly predisposed to want to like it.

Again, thankfully, the story was definitely much more positive in China, as illustrated in Figure 2. 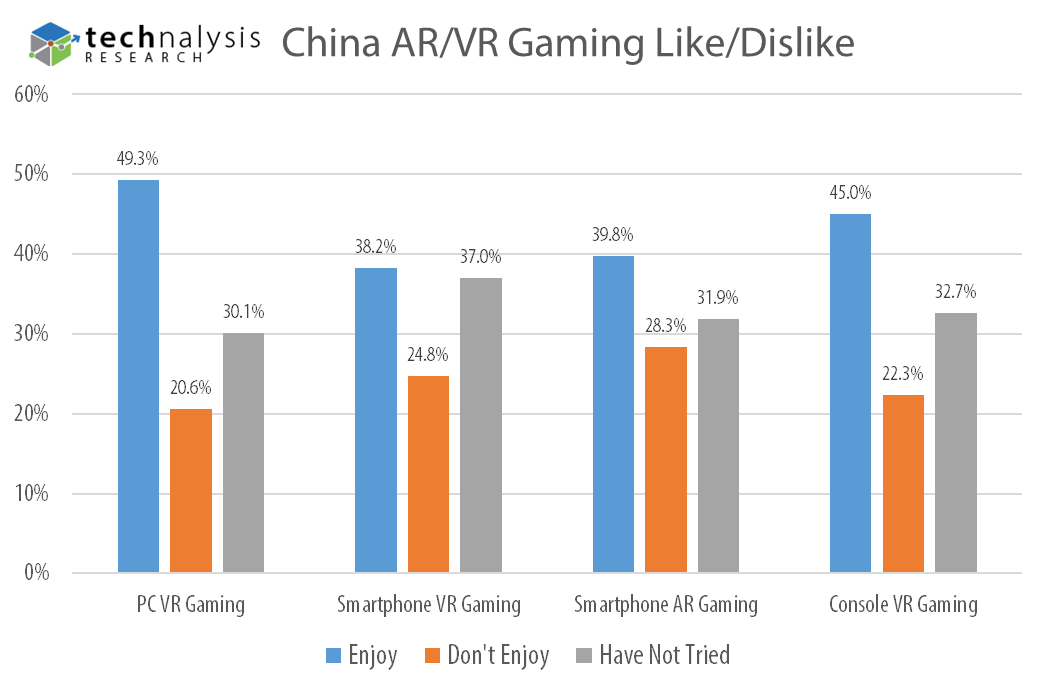 The number of people who hadn’t tried the various subcategories of AR/VR was 5% lower than the US at just under 33%. But even more importantly, the exact opposite comparison exists between like and dislike numbers for those who had tried these devices in China. Every single category shows that more people enjoyed the experience than those who didn’t enjoy it, with a particularly large positive gap in both PC-based VR gaming and console-based VR gaming. Even in China, there was about ¼ of the gaming respondents who didn’t care for AR/VR gaming, but this is certainly the type of outlook that companies who are trying to target the AR/VR gaming market would like to see. Exactly why the numbers for AR/VR are so much better in China isn’t entirely clear, but it’s likely due in part to the wider range of AR/VR gaming titles available in China, as well as the generally more enthusiastic gaming community that exists there.

The overall gaming market is growing quite strongly around the world, as renewed enthusiasm for PC gaming, as well as huge growth in interest for eSports, game streaming content channels like Twitch, gaming competitions, and big budget games like Fortnite all clearly illustrate. (Future columns will highlight more specifics from the survey to support all these points.) For AR/VR, however, the gaming momentum and seemingly natural tie-in to the category hasn’t had the kind of positive impact on device sales that many expected it would.

Certainly, there are other opportunities for different types of AR/VR applications, and right now, there does seem to be some enthusiasm in the enterprise/business segment for AR/VR. While that’s certainly good news, most of these applications are small, niche types of projects that can be difficult to turn into large, scalable businesses. Without consumer gaming, the short and mid-term prospects for AR and VR products is going to be very tough, and without dramatic improvements in quality and large reductions in price, even the long-term prospects could be difficult to sustain.