When I joined Creative Strategies in 1981, one of my tasks was to work with customers to help source materials and components for use in their products. Initially, I sourced materials for PC’s and over time became involved in sourcing all types of components and materials for a plethora of tech devices.

In most of the cases where I was asked to help in sourcing materials, the issue of quality of materials was top of mind. Because of those efforts, the kind of materials that go into a product has become an important part of my work and analytical thinking for the last 38 years.

Now that smartphones are the dominant tool that people use dozens of times a day and carry with them most of the time, I have been looking much more closely at the types of materials that are used in these devices and how the quality of these materials are becoming more important to customers.

One of the more significant developments in Smartphone design has been the use of glass backs to bolster the design, look and feel and the technical quality of the smartphone itself. Glass backs are essential for wireless charging, antenna reception and protection of the backside of the smartphone from scratches and breakage.

A recently released report from Counterpoint Research explains the growing glass back adoption: 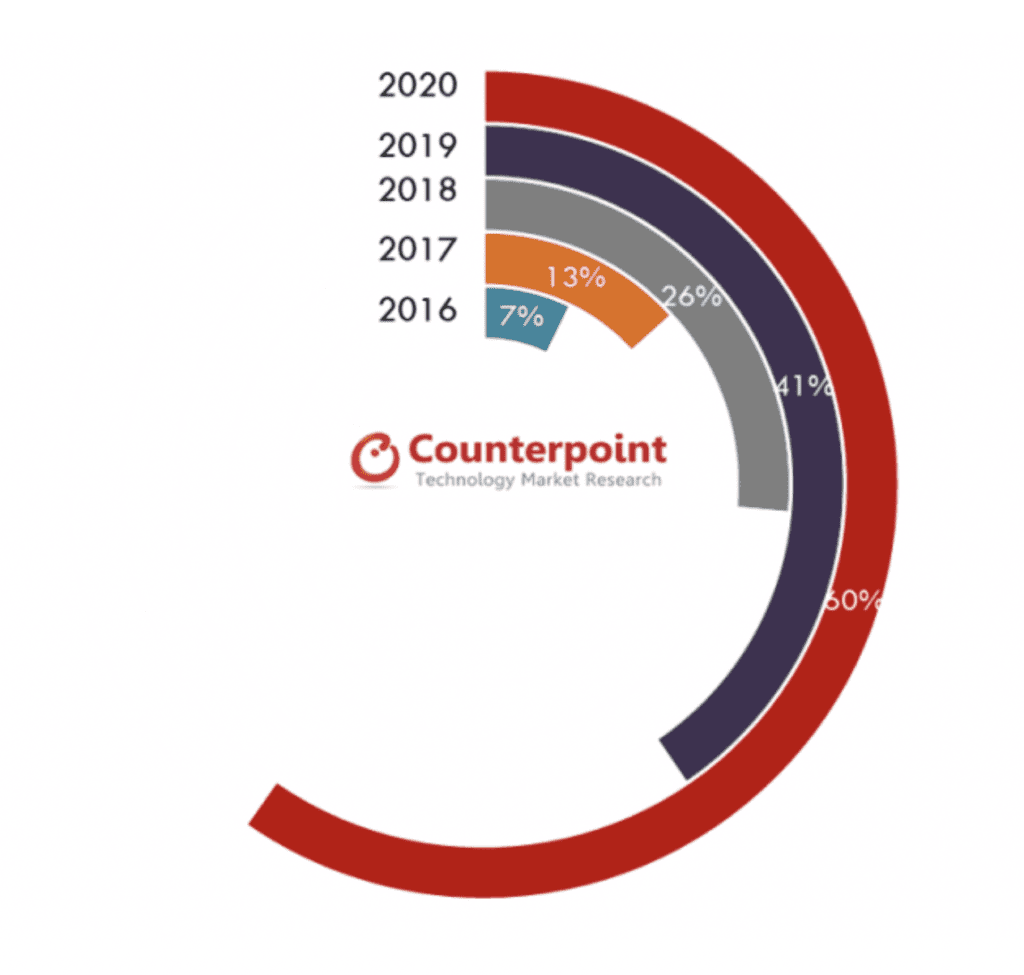 The other big trend that is impacting the smartphone business is that people now are keeping their smartphones for as many as three to four years, so the quality of the materials used in their smartphones matters a great deal more to them than when phones were much less expensive than they are today.

However, I had a meeting at CES with a significant smartphone ODM and found out that some smartphone vendors are using a kind of bait and switch approach to some of the smartphones they are designing these days. While they are using one of the versions of Corning’s Gorilla glass cover on the front of their phones, they are using inferior materials on the back.

More specifically, they are using various types of plastic or polycarbonate material that might look like a glass, but is much more susceptible to damage and scratches easier than glass. Some of these smartphones have been positioned as having quality materials on the front and back. The bait and switch come when they highlight the glass front but do not tell the users that the back is plastic, hoping they assume the back is glass too.

The good news is that this bait and switch are not used on any premium phones, but it appears in some mid to lower end smartphones where they are using this strategy to attempt to get costs down to mainly gain more market share. Besides being disingenuous, it gives the buyers of these phones a false sense of quality that does not exist given the plastic materials that are part of their final product.

Strengthened glass has been a proven material that has superior qualities when it comes to being scratch and damage resistant. Glass is also an excellent electronic conductive material too, so it makes sense to use glass on both the front and back as much as possible to deliver to the best user experience to a customer.

Ironically, as the ODM I spoke with told me, using an earlier version of Gorilla Glass on the back would be very cost effective in most of the mid-range phones and even some low-end phones and still allow them to be very price competitive in these categories. More importantly, it would deliver the kind of quality their customers expect now that they are keeping their phones much longer than in the past.

Inferior materials have been used in low-cost phones for over a decade. But today, smartphones are much more than a phone. They are pocket computers used for a variety of functions and applications. Consequently, their use is more critical to an individual and with people keeping them longer, the quality of the materials is more important than ever.

This issue of using some plastic in smartphones and, more recently, folding or flexible phones, will become a bigger problem for the vendors who make devices that use this material in the future. Any plastic cover, even the new fortified one’s from Samsung and others, can’t deliver the kind of quality and capabilities of glass. Corning’s various versions of Gorilla Glass has outperformed plastic covers from the beginning, and no plastic alternative material has come out to compete with their glass solutions to date. Glass is lightweight, has superior quality to plastic and can be shaped to fit any size smartphone easily.

Samsung’s plastic cover for their flexible smartphone that was announced recently at their Unpacked event in San Francisco is the best of a breed of an alternative plastic material so far. And while they seem committed to using this in this early model, I believe that once Corning releases their flexible glass cover for use in folding smartphones, they will move to glass for their future folding phones.

Indeed, Corning has only briefly talked about work on a folding glass cover and has not committed to anytime when it can be ready for the market. But the smartphone ODM’s I have spoken with who are working on a whole host of flexible devices, say there will be pent up demand for Corning’s foldable glass cover whenever it comes to the market.

As people continue to embrace smartphones as pocket computers, and plan to keep them longer and longer, they become a must-have digital companion at their side at all times. That means that out of all of their digital devices, smartphones will most likely get more use and take a greater beating than any other tech product they use daily.

Because of that trend, I believe that people around the world are going to become much more conscious of the quality of their smartphones and demand, even in many lower cost phones, that their vendors use quality materials. Much like computers of the past, smartphones are increasingly becoming investments that a consumer keeps for three-to-four years now and they need to last.