If you ask in the tech industry, you’ll hear stories about PC vendors and technology companies that lose an edge after becoming a market leader. Competition sharpens minds and accelerates research and design initiatives to gain that one foothold over the other guy that puts you firmly in the leading position. But too often that slips away as stagnation and complacency rolls in.

With Q1 results from IDC available, HP continues to maintain market share leadership in the PC space, pulling in 20.9%, holding above Dell and Lenovo. Recent announcements from the company also indicate that the company is attempting to avoid any stalling of growth by continuing to innovate and push forward with new designs and product programs.

The new philosophy at HP focuses on the “one-life” design ideal, where commercial and consumer users share hardware between personal and business use. For a younger generation that blurs the lines between work-time and play-time, having devices that can fill both roles and permit a seamless transition between those states is deal.

Just this month, the company announced updates to its premium lines of notebooks and desktops in an attempt to showcase its ability to provide products fitting of both roles. 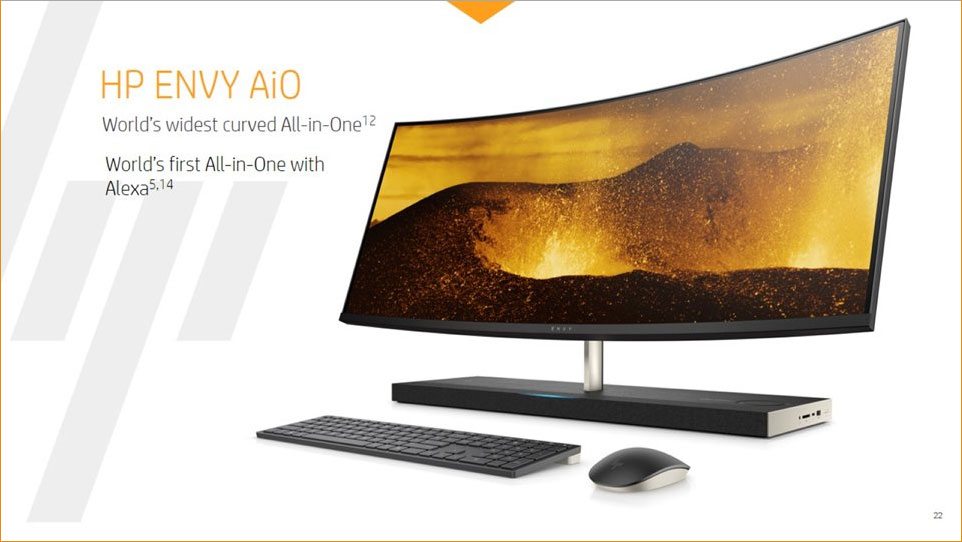 Perhaps the most interesting is the new HP Envy Curve, an all-in-one PC that is more than your typical tabletop design. Internals of the system are impressive, but don’t do the rest of the system justice. Yes, including a powerful 8th-gen Intel CPU, SSD storage, and 16GB of memory are a requirement, but it’s the smaller touches that make the Envy Curve stand out.

In the base of the unit HP has embedded four custom Bang & Olufsen speakers angled upward at 45 degrees to better direct audio to the consumer. All-in-ones have traditionally included the most basic of speaker implementations, but HP is hoping it can add value to the Curve and provide high quality sound without the need for external hardware.

The curved 27-in or 34-in QHD display rests on a thin neck and is coupled with a wood grain finish on the back, giving the PC a distinct aesthetic that few others in the computing market offer. If computing is in threat of being commoditized, then customization and style will be key drivers of upgrades and purchases.

Two other innovations help the Envy Curve stand out. The base includes an embedded wireless Qi charging ring, meaning you can charge your phone without the annoyance of cables or USB ports, maintaining a clean footprint. HP has also integrated Amazon Alexa support, giving PC users access to the most popular digital assistant in the home and an alternative to Cortana on Windows 10. It all adds up to a unique product for a shifting desktop landscape.

Though the Envy Curve is part of it, the Envy family is more well known for its notebook line. It rests between the company’s budget-minded Pavilion and the ultra-high-end Spectre options. Attempting to further drive the premium notebook space, where HP gained 3.2 share points just last quarter, the Envy lineup will be seeing a host of new features and options courtesy of the innovation started with Spectre. 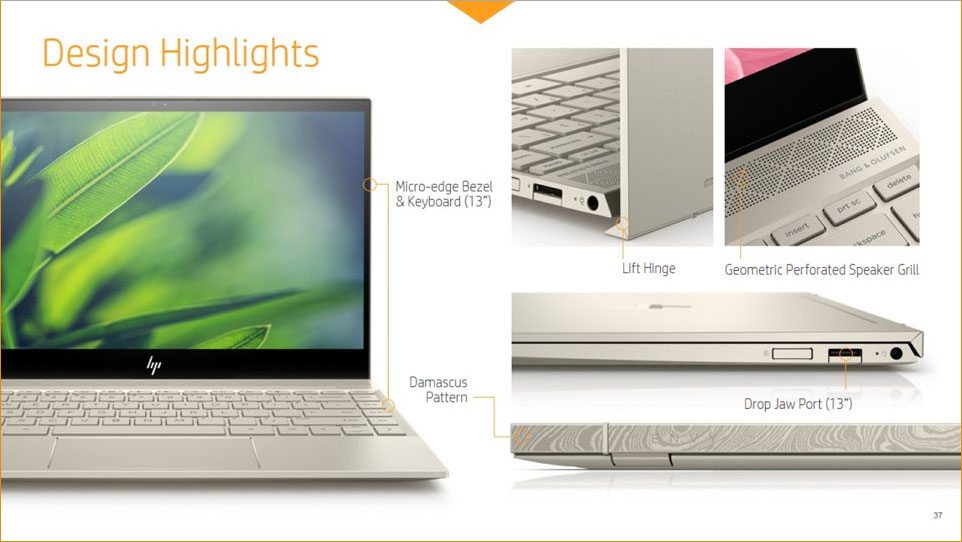 These design changes include thinner bezels around the screen, shrinking them to get nearer to the edge to edge designs that have overtaken smartphones. HP was quick to point out that despite this move, it kept the user-facing camera at the top of the device, even though it means slightly wider bezels on that portion, to prevent the awkward angles of other laptops.

Sure View is a technology that makes displays unreadable to anyone off angle, preserving privacy of data and content and is a nice addition stemming from the company’s business line. It can be enabled with the touch of a button and doesn’t require the consumer to semi-permanently enable it with a stick-on film.

Both the 13-in and 17-in Envy models will be using 1080p displays but have a unique lift hinge that moves the keyboard to an angle more comfortable for typing. HP was able to make the device slim and attractive but still maintain connectivity options users demand by implementing a jawed USB Type-A port.

The convertible Envy x360 13-in and 15-in improvements are similar, and both now offer AMD Ryzen APU processor options, giving consumers a lower cost solution that provides a very different performance profile to the Intel processors.

HP Elitebooks, known for their enterprise capabilities, got some updates this month as well. The new Elitebook 1050 G1 is the first 15-in screen in the segment and includes pro-level features like Sure Click, Sure Start, and Sure View all aiming at keeping commercial hardware secure and reliable. The Elitebook x360 1030 shrinks the device footprint by 10%, squeezes a 13-in screen in a form factor typical of 12-in models, and has a direct sunlight capable display that reaches brightness levels as high as 700 nits, perfect for contractors and sales teams that need to work outdoors.

To be fair and balanced, nothing that was announced is on the scale of revolutionary shifts but attempting to do that in the mature PC space is nearly impossible to pull off. Design shifts like thinner bezels, smaller footprints, brighter screens, and even Amazon Alexa integration do show that there is room left in the tank to tweak and perfect design. HP is using its engineering and product teams to do just that, while trying to maintain the market share position it has earned over Dell and Lenovo.

For those in the space that thought the PC was dead and innovation was over, HP has a few devices it would like to show you.